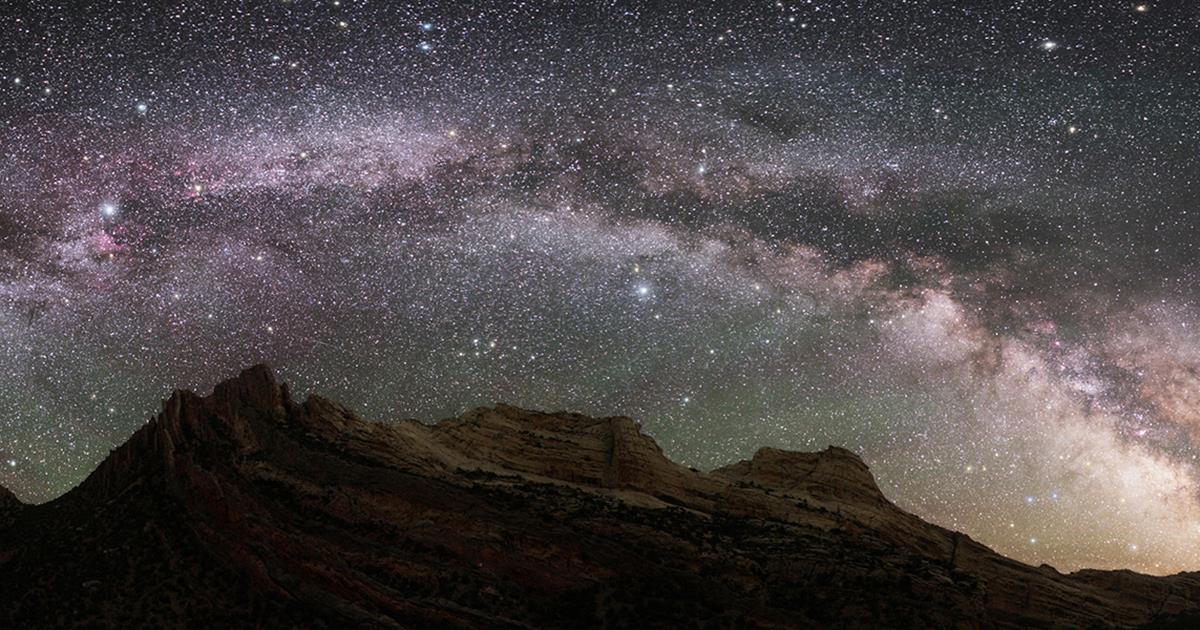 In the night sky, the band of light from the Milky Way makes our galaxy look like a crowded streak of stars and gas clouds. But today, scientists know its shape and structure in detail: the spiral arms wrapping around the galaxy’s center, its central bulge packed with stars and a gargantuan black hole, and its fainter, fluffy halo of stars farther out, as if our galaxy were cocooned within a stellar cotton ball. They also know that an even more diffuse cloud of dark matter extends farther out still, revealed by the motions of the stars.

How did the Milky Way come to look this way?

Even just a decade ago, scientists knew the motions of, and the distance to, only a small number of stars in our galactic neighborhood, and so had only a partial picture of the Milky Way’s evolving structure. But the latest telescopes, including the European Space Agency’s Gaia that launched in 2013, have dramatically opened up our view to most of the galaxy. Their data reveal faraway clumps and streams of stars that, like fossils, offer hints about the galaxy’s complex history.

Amina Helmi of the Kapteyn Astronomical Institute in Groningen, the Netherlands, is a leading galactic archaeologist studying these remnants of past events, including the most momentous one: a massive, slow-motion impact with another galaxy that occurred some 10 billion years ago, in the Milky Way’s youth.

Writing in the Annual Review of Astronomy and Astrophysics, Helmi argues that our galaxy’s disk, halo and wispy streams of stars bear evidence of this galactic collision and other long-ago events. Yet despite this past tumult, the Milky Way’s past is comparatively peaceful, Helmi notes — it assembled mostly by birthing new stars from cooling gas and from older stars, rather than by dragging other galaxies into its maw.

But even this relatively quiet history leaves plenty of remnants for Helmi and her colleagues to sift through, including clues in the stars’ chemical makeups — since each generation of stars has new chemical signatures that lean toward heavier elements than the stars that came before them.

Helmi spoke with Knowable Magazine about her research into the Milky Way’s unique history. This conversation has been edited for length and clarity.

What does “galactic archaeology” mean to you?

What we try to do with galactic archaeology is to try to reconstruct the history, the sequence of events, that led to the formation of the Milky Way. In archaeology, you use the remains, or the leftovers, or the artifacts, of different civilizations or events. In this case, the leftovers are stars, so we use stars to try to figure out how the Milky Way was put together. Stars remember where they came from, they have memory of their origins.

How do our galaxy’s stars tell us about the Milky Way’s past?

The way they move, their ages and their chemical compositions tell us about where they were born. If you find groupings of stars with distinct chemical compositions, for example with different relative amounts of oxygen, magnesium and iron, that may tell you they came from different environments — since stars born in the same cloud are bound to have the same chemical fingerprints. Similarly, if you find groups of stars moving together through space, that tells you they have a similar trajectory, so they came from the same place. You can use that to reconstruct where they were born.

How did you and your colleagues figure out that the Milky Way had a massive impact with another galaxy when it was young? Can you explain how that evidence emerged?

First, we found that, near the sun, roughly half of the stars in what we call the halo — which hosts very old stars in the Milky Way — were rotating in the opposite direction to the vast majority of stars in the Milky Way, the other half belonging to a very puffy, disk-like component. So that was suspicious. That could mean the halo was formed by a merger with another galaxy. But it wasn’t enough evidence, because maybe there are other ways you can produce these kinds of stars.

Then we looked at the ages and chemistry of those counter-rotating halo stars and found that they were following a different track than those of the vast majority of stars in the Milky Way. The chemical composition of those halo stars tells you they were born in a different, smaller system.

Was there anything surprising about that 10-billion-year-old impact with a smaller galaxy, which you dubbed Gaia-Enceladus?

The predictions from models of the expanding universe, based on what we know about gravity and dark matter, say that typically between two and four different mergers with relatively massive objects would be expected, plus many smaller ones, to end up with a Milky Way-sized galaxy today. So for us, it was surprising to find that the halo is dominated by only one object.

We found that this event perturbed the Milky Way so much that many of the stars present at the time ended up in the puffed up, or hot, thick disk. Colleagues of mine afterwards showed that the thick disk, which contains roughly one-fifth of the stars in the galaxy, probably was also formed in the event. That’s because galaxies in the past were likely gas-rich, so when you had a massive merger like that, it would pull gas clouds together, making high-density regions that trigger a lot of star formation. And we do see that star formation peaked at the same time as the merger, substantially growing the Milky Way’s disk.

So this event was a major milestone in galactic history.

How does the Milky Way’s history compare with that of its peers?

It’s hard to figure these things out for other, more distant galaxies, because we don’t have as much detailed information about them and their stars. However, there are more and more studies searching for streams and substructures in other galaxies, and we are learning about the importance of the merging process in general. And there are studies of how common interacting pairs of galaxies are, which identify objects that are currently or about to merge. Theoretical models of the growth of galaxies in the expanding universe are also guiding us as to where to look, or how to identify, clues of the merger history of a galaxy.

Some astronomers state that the Milky Way seems to be quiescent compared to other galaxies, since models tend to predict more mergers, on average, but I believe a more detailed assessment is necessary to establish this firmly.

That’s particularly because we only reconstructed the history up to 10 billion years ago, and we don’t know what happened before that. We need more data of many more, fainter stars — particularly their chemical compositions, which is known for a very small number of halo stars in the Milky Way — to figure this out.

What role has dark matter played in your research on the history of the Milky Way?

I think you always have to take into account that there is dark matter around these galaxies, including around the Milky Way. If there is a merger, dark matter makes the merger happen on a faster timescale, because there’s so much more mass in dark matter than in the stars alone.

At the moment, we have not yet used any of the information we have gathered recently about the ancient merger history of the Milky Way to try to estimate how much dark matter there is in and around it or how it’s distributed, but we will in the near future. For example, if you’re convinced that certain stars came from the same object, and they’re located in different regions of the galaxy, that can be used to calculate the gravitational pull of the Milky Way and the dark matter distribution in it.

What have you learned from the Gaia space telescope that wasn’t known before?

Measuring the motions of stars on the sky is extremely challenging. Before Gaia, we had the measurements of about 2 million stars nearby, from a mission called Hipparcos in the ’90s. Now it’s 2 billion. Then there’s the volume: The volume of space we can measure the motions in is a factor of 100 in radius larger now. And it’s a factor of 1,000 more precise. It’s a vast amount of data of exceedingly high quality.

It’s just been completely transformational. This research would not have been possible without Gaia. It has changed the way we understand the Milky Way. For example, we’ve also realized that we cannot consider the Milky Way as an isolated system. People used to think of galaxies as “island universes,” separated from the environment around them. That is an important change in how we approach the problem of determining the distribution of mass throughout the galaxy. In the past it was often assumed that the galaxy was in equilibrium and wasn’t really changing much. Now we have the data showing us that that’s an oversimplification, since the motions of the stars near the sun are revealing the imprints of the pull of neighboring galaxies, which themselves are being pulled in by the Milky Way.

What kinds of tools on the horizon are you looking forward to, including upcoming telescopes and new simulations?

We definitely need chemistry, since the relative amounts of different chemical elements in stars tell us where they’re from and also help in assessing how old they are. There are several planned surveys that will soon see the light that will measure the chemical abundances of hundreds of thousands of stars, particularly in the halo of the Milky Way. These are multi-object spectrographs that measure the light of many objects at once in many wavelengths, including in ranges that key atoms of various chemical elements emit in.

For example, there’s one in La Palma in the Canary Islands, called WEAVE, that will explore the northern sky, and one called 4MOST at Paranal Observatory in Chile that will study the southern skies. A full view of the Milky Way is needed if you want to understand how it formed.

We also need more sophisticated galaxy simulations that include more than just gravity and dark matter. We interpreted our findings regarding Gaia-Enceladus using a 10-years-old simulation that didn’t include any gas or star formation, but that’s not realistic. We need to try to understand what happens when you add gas to simulations and follow the evolution of star formation and also of chemical elements, which will give us a more complete and realistic picture of the galaxy’s history. We also need to try to understand if this one big merger has also had an impact on the properties of other components of the Milky Way, such as the central bulge.

Based on observations and models, can you make predictions for the Milky Way’s future over the next few billion years?

In a few billion years, the Milky Way will merge with the Large and Small Magellanic Clouds. Roughly a billion years after that, the galaxy will also merge with Andromeda. That’s going to be a major change for the Milky Way. This is an object that has basically the same mass, and when two galaxies of the same mass merge, you typically make an elliptical galaxy, a rounder structure with no disk or spiral arms. And since it’s likely both galaxies will still have lots of gas then, that will lead to lots of star formation. So the sky is going to look completely different.

This article originally appeared in Knowable Magazine, an independent journalistic endeavor from Annual Reviews. Sign up for the newsletter.

Knowable Magazine is an independent journalistic endeavor from Annual Reviews.