Posted by: R. Mitchell in In the News August 11, 2020 Comments Off on Active duty soldier, government employee admit to stealing over $1 million in military equipment 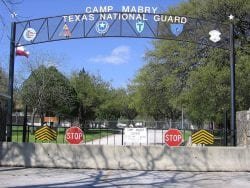 AUSTIN, Texas — An active duty soldier and former government employee at Camp Mabry admitted to stealing and unlawfully selling more than $1 million worth of items from the military installation.

Cristal Avila, 27, from Fort Worth, Texas, and Joseph Mora, 35, from Schertz, Texas, entered their guilty plea Aug. 7, in front of U.S. District Judge Mark Lane. Both pleaded guilty to one count of theft of government property. Avila was currently an active duty soldier with the Texas National Guard while Mora was working as a program analyst at the U.S. Property and Fiscal Office warehouse.

Avila and Mora admitted to conducting a scheme to remove large quantities of sensitive military grade equipment, including rifle scopes, infrared laser aiming devices and thermal night vision goggles, from the facility without authorization. Mora later sold many of the stolen items on eBay and by other means.

According to court documents, on September 24, federal agents executed a search warrant at Mora’s residence and recovered dozens of items believed to be stolen from Camp Mabry, including pelican cases containing aiming lights, a pallet of night vision goggles and tripods.

Avila and Mora face up to 10 years in federal prison and have agreed to pay restitution to the government for the stolen items as well as profits generated from the sale of those items. Both remain on bond pending sentencing which has yet to be scheduled.

Wake up Right! Subscribe to our Morning Briefing and get the news delivered to your inbox before breakfast!
2020-08-11
+R. Mitchell
Previous: Watch Live: President Trump Holds a News Conference – 8/11/20
Next: Laredo Officers Seize Methamphetamine Worth Over $18 Million in Street Value