Posted by: Duncan Idaho in In the News May 10, 2019 Comments Off on Blue Origin is ‘Going to space to benefit Earth’ [Full Video] 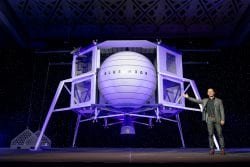 On May 9, 2019, Blue Origin founder Jeff Bezos discussed his vision to go to space to benefit Earth.

In addition, he also announced the Blue Moon lunar lander, which is capable of taking people and payloads to the lunar surface. Below you’ll find more information about these announcements. 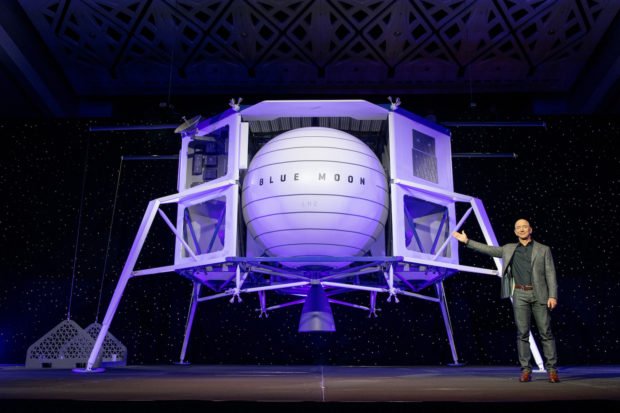 Blue Moon lunar lander: Blue Origin announced Blue Moon, its large lunar lander capable of delivering multiple metric tons of payload to the lunar surface based on configuration and mission. The cargo variant revealed today can carry 3.6 metric tons to the surface. We have also designed a variant of the lander that can stretch to be capable of carrying a 6.5-metric-ton, human-rated ascent stage. Blue also announced it can meet the current Administration’s goal of putting Americans on the Moon by 2024 with the Blue Moon lunar lander.

BE-7 engine: The Blue Moon lunar lander will be powered by the BE-7 engine, a new addition to Blue Origin’s family of engines. The BE-7’s 40 kN (10,000 lbf) thrust is designed for large lunar payload transport. The engine’s propellants are a highly-efficient combination of liquid oxygen and liquid hydrogen. The BE-7 will have its first hotfire this summer. The engine will be available for sale to other companies for use in in-space and lander applications.

Club For the Future: A non-profit founded by Blue Origin dedicated to inspiring and engaging the next generation of dreamers and space entrepreneurs as we journey to preserve Earth and unlock the potential of living and working in space. The Club will bring together K-12 students, educators and leaders for campaigns and initiatives utilizing Blue Origin’s unique access to space. The Club’s first activity will be to send a postcard to space and back on a future New Shepard mission—the first ever space mail. Learn more on the website (www.clubforfuture.org). Follow @ClubforFuture on Twitter and Instagram.

Blue Origin is ‘Going to space to benefit Earth’ [Full Video] is original content from Conservative Daily News – Where Americans go for news, current events and commentary they can trust – Conservative News Website for U.S. News, Political Cartoons and more.

Wake up Right! Subscribe to our Morning Briefing and get the news delivered to your inbox before breakfast!
2019-05-10
Duncan Idaho
Previous: Watch Live: President Trump and The First Lady Participate in the Celebration of Military Mothers
Next: ICE shares nearly $300K with Hazleton City Police Department for assistance in narcotics investigation