Posted by: R. Mitchell in In the News October 26, 2019 Comments Off on Border Patrol Agents Apprehend Group of 51 Illegal Aliens 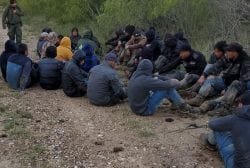 Agents from the Carrizo Springs Station were performing line watch operations when they discovered discrepancies on a trail leading away from the Rio Grande River. Agents in the area began following the trail, and with the assistance of a CBP Air and Marine Operations helicopter, apprehended a group of 51 individuals, all citizens of Mexico, including seven juveniles over the age of 15, after they illegally entered the United States.

Due to the vicinity of where the group was apprehended, they were subsequently turned over to the Laredo West Border Patrol Station and will be processed per U.S. Customs and Border Protection guidelines.