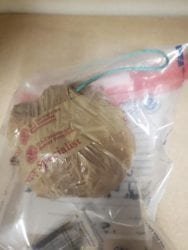 The incident occurred at approximately 9:15 p.m., when a Remote Video Surveillance System (RVSS) operator notified agents of a package being launched over the International Border Fence from Mexico into the United States.  An agent responded to the location and discovered a kettlebell shaped package just east of the Calexico water tower near the fence.

The agents seized and transported the package back to the Calexico Border Patrol Station for further processing.

At the station, the package tested positive for methamphetamine, with a weight of 1.10 pounds with an estimated street value of $2,475.

The narcotic packages were turned over to the Drug Enforcement Administration (DEA).