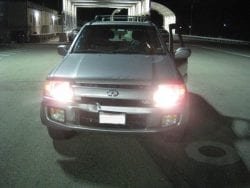 PINE VALLEY, Calif. — Border Patrol agents at the Interstate 8 checkpoint arrested a man and his adult daughter with more than 56 pounds of methamphetamine inside their car on Friday.

On May 1, at approximately 1:25 a.m., a silver 2001 Infiniti QX4 approached the I-8 checkpoint. While agents questioned the driver, a K9 detection team preformed a sniff of the vehicle. The driver was referred to secondary inspection after the K9 alerted to the vehicle.

With a further search, agents discovered 39 plastic-wrapped packages of methamphetamine concealed inside three duffel bags on the backseat of the car.  The packages weighed 56.88 pounds and have an estimated street value of $62,568.

The man, a 42-year-old United States citizen and his 18-year-old daughter, were placed under arrest.  The narcotics were turned over to the Drug Enforcement Administration and the vehicle was seized by the U.S. Border Patrol.

Teachers Unions Are Again Flexing Their Political Muscle, This Time…