Posted by: R. Mitchell in In the News May 13, 2019 Comments Off on Border Patrol Apprehends 251 Illegal Aliens in Presidio, Texas 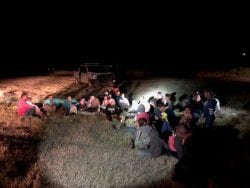 Big Bend Sector Chief Patrol Agent Matthew Hudak said, “The significant number of arrests by Presidio Station agents is evidence that the dramatic increase in illegal entries along the southern border is impacting us locally.” Chief Hudak added, “The volume of arrests challenges our ability to effectively patrol the border while our agents are consumed by caring for persons in our custody. I commend our agents for their professionalism and dedication in the face of these challenges.”

On Thursday, at approximately 11:30 p.m. the Presidio Station was informed of a large group of individuals attempting make illegal entry into the U.S. within the city limits of Presidio, Texas.  Presidio agents responded to the last known location of the group and safely arrested 56 individuals without incident.  On Friday morning, Presidio agents arrested an additional group of 19 individuals illegally present in the U.S.

Between Saturday and Sunday, the agents arrested an additional 176 individuals illegally present in the U.S.

All 251 subjects will be charged and processed according to the applicable immigration laws. Big Bend Sector has apprehended over 648 illegal aliens in the first 13 days of May.  More than half of the illegal aliens have been apprehended by agents assigned to the Presidio Station.

Big Bend Sector Border Patrol agents, patrol 517 miles of the southwest border, an area that extends from Sierra Blanca, Texas to Sanderson, Texas.  The Presidio Station area consists of the southern half of Presidio County, the third largest county in the state of Texas. The station is responsible for 113.8 border miles between the U.S. and Mexico and 1,100 square miles of area of responsibility. The U.S. Border Patrol is made up of over 19,000 brave men and women who courageously secure our nation’s borders.  Help us secure our homeland, find out more at cbp.gov/careers.

Wake up Right! Subscribe to our Morning Briefing and get the news delivered to your inbox before breakfast!
2019-05-13
+R. Mitchell
Previous: Nearly 100 people indicted, 50 currently in custody in massive Houston-based marriage fraud conspiracy
Next: President Donald Trump’s Schedule for Tuesday, May 14, 2019