Posted by: R. Mitchell in In the News May 17, 2019 Comments Off on Border Patrol Apprehends 98 Illegal Aliens in Presidio, Texas 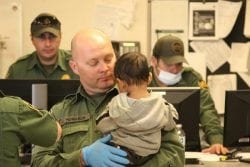 Patrol Agent in Charge of the Presidio Station Derek Boyle said, “Transnational criminal organizations continue to use large groups to saturate and distract our agents.  While these groups affect our ability to provide effective border security, it is through our community partnerships that we have been extremely successful in apprehending human trafficking and narcotics smuggling loads.  I am proud of Presidio Station and Big Bend Sector agents, as well as the efforts and collaboration from our state, local and international partners.”

On Thursday, at approximately 6:30 a.m. the Presidio Station was informed of a large group of individuals attempting to make illegal entry into the U.S. within the city limits of Presidio, Texas.  Presidio agents responded to the last known location of the group and safely arrested 98 individuals without incident.  The group was mostly made up of family units and unaccompanied alien children.

All 98 subjects will be charged and processed according to the applicable immigration laws. Big Bend Sector has already apprehended over 800 illegal aliens in the month of May.

Big Bend Sector Border Patrol agents, patrol 517 miles of the southwest border, an area that extends from Sierra Blanca, Texas to Sanderson, Texas.  The Presidio Station area consists of the southern half of Presidio County, the third largest county in the state of Texas. The station is responsible for 113.8 border miles between the U.S. and Mexico and 1,100 square miles of area of responsibility. The U.S. Border Patrol is made up of over 19,000 brave men and women who courageously secure our nation’s borders.