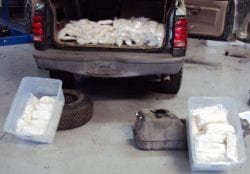 TEMECULA, Calif. — U.S. Border Patrol agents arrested a man who had more than 90 packages of methamphetamine hidden inside various locations of his car on Friday.

At approximately 11:15 a.m., an agent patrolling Interstate 15 near Temecula observed a suspicious 2001 Green Ford Explorer.  The driver of the Explorer exited onto Highway 395 and parked at a gas station in Rainbow, Calif. when he observed the agent following him.

The agent engaged the driver in conversation while his canine partner performed an exterior sniff of the Explorer.  Shortly after, the canine alerted to the vehicle.

The agent performed a detailed search of the vehicle and found 96 packages of methamphetamine inside the gas tank, spare tire, and quarter panels of the vehicle.  With a weight of 101.31 pounds, the meth is valued at approximately $191,900.

The 34-year-old U.S. citizen driver was arrested and faces charges for narcotics trafficking.  The methamphetamine packages were turned over to the Drug Enforcement Administration.  The vehicle was seized by the U.S. Border Patrol.

San Diego Sector agents have seized more than 1,044 pounds of methamphetamine since October 1, 2019.

“I am very proud of the dedication displayed by these agents,” said San Diego Chief Patrol Agent Douglas Harrison.  “They are committed to protecting America and keeping dangerous narcotics like these from reaching our communities.”

Wake up Right! Subscribe to our Morning Briefing and get the news delivered to your inbox before breakfast!
2020-01-14
+R. Mitchell
Previous: Border Patrol seizes more than $1M of drugs in the Rio Grande Valley
Next: ICE, U.S. Marshals, arrest Salvadoran terrorist in Carson City