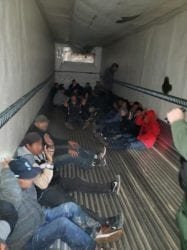 The incident occurred at approximately 9:40 p.m. when a man drove a tractor-trailer to the checkpoint.  During primary inspection, Border Patrol agents conducted an immigration check on the driver.  During the inspection, a Border Patrol canine detection team alerted to the rear cargo area of the trailer.  The driver and was referred to secondary for further inspection.

Border Patrol agents inspected the cargo area of the truck and discovered 26 illegal aliens inside the bed of the trailer.

The immigrants were locked inside the trailer with no safety restraints and with no way to extricate themselves from the inside.  Agents safely removed all the occupants.

The 32-year-old truck driver presented a California driver’s license as his own.  However, that document was later determined to be an imposter document.  The driver was determined to be a Mexican national illegally present in the United States.

The driver and all 26 undocumented immigrants, which include one male and one female juvenile, were placed under arrest.

“The undocumented immigrants were locked and trapped inside this tracker-trailer in below 45-degree weather with no safety restraints,” said Chief Patrol Agent Gloria I. Chavez.  “This smuggling organization had no regard for the safety of the people they were smuggling.  Fortunately, our agents were able to remove them from that potentially life-threatening situation.”

Watch Live: President Trump Gives an Update on the Nation’s…