Posted by: R. Mitchell in In the News February 15, 2019 Comments Off on CBP in Collaboration with HSI Intercepts Largest Cocaine Contraband at Port Hueneme in 25 Years 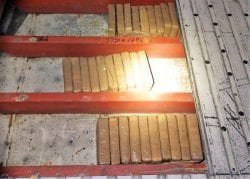 On January 22, while conducting an enforcement boarding of a refrigerated vessel arriving from Ecuador, CBP officers discovered 80 bundles of cocaine weighing 204.2 pounds (92.64 kilograms). The narcotics were concealed within the floorboards of the cargo vessel. A week after, on January 28, CBP officers discovered seven bundles of cocaine weighing 17.5 pounds (7.96 kilograms) inside the floorboards in another cargo vessel this time arriving from Guatemala.

“CBP plays a critical role in the effort to keep dangerous drugs from illegally entering the country. Specifically, by leveraging a comprehensive, multi-layered, intelligence driven, and threat-based approach to enhance the security of our seaports, we can diminish the effectiveness of transnational criminal organizations drug operations,” said Carlos C. Martel, CBP Director of Field Operations in Los Angeles.

The investigative expertise from HSI special agents who are now leading the ongoing investigation, was critical to the success of this interception.

“HSI is committed to stopping those who seek to smuggle illegal drugs across our borders,” said Joseph Macias, Special Agent in Charge for Homeland Security Investigations (HSI) Los Angeles. “As drug traffickers get more creative, we are working round-the clock with CBP and our law enforcement partners to stop this activity. HSI is generating a significant amount of intelligence in this investigation, which we will use to identify, disrupt and ultimately dismantle the criminal organization behind this scheme.”

“This is the largest drug seizure at Port Hueneme in the last quarter of a century,” said LaFonda Sutton-Burke, CBP Port Director of the LA/Long Beach Seaport, and Port Hueneme. “I’m extremely proud of the results of this joint effort, it shows the professionalism, vigilance and keen focus of both agencies in preventing dangerous drugs into our communities.”

U.S. Customs and Border Protection is the nation’s largest federal law enforcement agency charged with securing the nation’s borders and facilitating international travel and trade. Our top priority is to keep terrorists and their weapons from entering the United State. At the nation’s more than 300 ports of entry, CBP officers have a complex mission with broad law enforcement authorities tied to screening all foreign visitors, returning American citizens and imported cargo that enters the U.S

HSI is a critical investigative arm of the Department of Homeland Security and is a vital U.S. asset in combating criminal organizations illegally exploiting America’s travel, trade, financial and immigration systems.

CBP in Collaboration with HSI Intercepts Largest Cocaine Contraband at Port Hueneme in 25 Years is original content from Conservative Daily News – Where Americans go for news, current events and commentary they can trust – Conservative News Website for U.S. News, Political Cartoons and more.

READ  Attorney General Barr Calls FBI Actions Against Trump Campaign ‘Clear Abuse of the FISA Process’
Wake up Right! Subscribe to our Morning Briefing and get the news delivered to your inbox before breakfast!
2019-02-15
+R. Mitchell
Previous: CBP Officers Create A Double Play As They Seize Meth Worth Over $1.7 Million at the Laredo Port of Entry
Next: No Child Left Behind – A.F. Branco Cartoon