Posted by: R. Mitchell in In the News August 27, 2019 Comments Off on CBP Officers Seize Firearms and Ammunition While Conducting Outbound Inspections at the Gateway to the Americas International Bridge 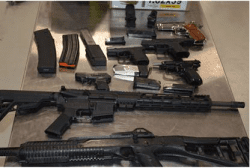 “This type of incident highlights the dangers our CBP officers could face on any given day,” said Port Director Albert Flores, Laredo Port of Entry. “This firearms and ammunition seizure is a direct reflection of our continuing commitment in keeping our community safe.”

The seizure occurred on Tuesday, Aug. 27, when a CBP officer referred a 2007 Chevrolet Impala for an intensive inspection. Upon a canine and physical inspection of the vehicle by CBP officers, boxes of ammunition and assorted firearms were discovered. During the examination CBP officers discovered one Hi Point .45 Caliber, one Diamondback 15 Multi Caliber, one SCCY 9mm, one Smith and Wesson 39, one SHE 89 Caliber, one Springfield 45 ACP Compact, one Ruger .380 Auto, eight assorted firearm magazines, and 10,000 7.62x39mm rounds of ammunition and one .40 Caliber bullet.

CBP officers seized the vehicle, firearms, ammunition and assorted magazines. The subject was detained by CBP. The case was then turned over to U.S. Immigration and Customs Enforcement-Homeland Security Investigations (ICE-HSI) special agents for further investigation.

CBP is responsible for securing our borders at the ports of entry. U.S. Customs and Border Protection officers’ primary mission is anti-terrorism; they screen all people, vehicles, and goods entering the United States, while facilitating the flow of legitimate trade and travel into and out of the United States. Their mission also includes carrying out traditional border-related responsibilities, including narcotics interdiction, enforcing immigration law, protecting the nation’s food supply and agriculture industry from pests and diseases, and enforcing trade laws.

While anti-terrorism is the primary mission of U.S. Customs and Border Protection, the inspection process at the ports of entry associated with this mission results in impressive numbers of enforcement actions in all categories.

CBP Officers Seize Firearms and Ammunition While Conducting Outbound Inspections at the Gateway to the Americas International Bridge is original content from Conservative Daily News – Where Americans go for news, current events and commentary they can trust – Conservative News Website for U.S. News, Political Cartoons and more.

Wake up Right! Subscribe to our Morning Briefing and get the news delivered to your inbox before breakfast!
2019-08-27
+R. Mitchell
Previous: President Donald Trump’s Schedule for Wednesday, August 28, 2019
Next: Border Patrol Seizes 146 Pounds of Meth in Two Separate Events