Posted by: R. Mitchell in In the News March 29, 2019 Comments Off on CBP’s Air and Marine Operations Stop $17 Million Drug Shipment 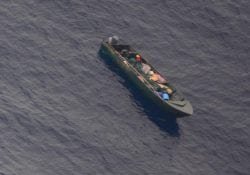 Agents patrolling in a P-3 discovered a suspect panga-style vessel that was located in international waters off the coast of Central America. A U.S. Coast Guard law enforcement team aboard a U.S. Navy ship patrolling in the area boarded the abandoned “panga” and discovered 6,100 pounds of marijuana destined for the United States. The Coast Guard and Navy teams seized the narcotics and sank the vessel as a hazard to navigation.

“Typically most of the illicit traffic in the Eastern Pacific Ocean is smuggling cocaine, but marijuana is also a major source of income for drug trafficking organizations,” said Director of Air and Marine Operations Bob Blanchard. “The important thing is that our agents are there to stop these harmful drugs from getting to our streets.”

With 1,800 federal agents and mission support personnel, 240 aircraft and 300 marine vessels operating throughout the United States, Puerto Rico, and U.S. Virgin Islands, Air and Marine Operations uses its sophisticated fleets to detect, sort, intercept, track and apprehend criminals in diverse environments at and beyond U.S. borders.

READ  President Donald Trump’s Schedule for Saturday, August 17, 2019
Wake up Right! Subscribe to our Morning Briefing and get the news delivered to your inbox before breakfast!
2019-03-29
+R. Mitchell
Previous: Many Students Who Support Socialism, Wouldn’t … if Their Property Were Being Redistributed
Next: Maine Border Patrol Agents Recognized for Efforts on Southwest Border