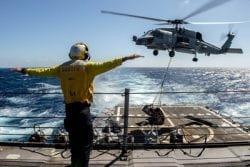 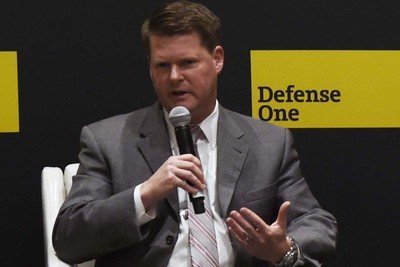 The relationship between the U.S. military and China has become more competitive, as the U.S. has tried to enforce the sanctions on North Korea, a Defense Department official said.

Randall Shriver, DOD’s assistant secretary of defense for Indo-Pacific security affairs, said in the past, the relationship with China was a mixture of engagement and competition, but that has changed in recent years.

“We pressed them hard on North Korea,” Shriver said. “We’re trying to enforce the sanctions, and the primary method by which North Korea is attempting to evade the sanctions are through illicit and illegal ship transfers, primarily coal, going out and oil going in. Over time, much of this activity has moved into Chinese territorial waters.”

Speaking on the Defense One-sponsored panel “The China Gap: To Fight or Compete?,” Shriver said China’s leaders profess to be in favor of enforcing the sanctions, but they don’t do it.

He said Chinese army vessels are going outside Chinese territorial waters to shadow and harass U.S. vessels that are trying to enforce the sanctions.

Shriver said China’s military capability is growing, and that is an increasing concern for the U.S. “I hope it gets on a more cooperative path,” he said.

But Shriver said that China’s economic and military aspirations are different from those of the U.S. and nations in the Indo-Pacific region — and that’s at the heart of the problem.

The Chinese want a system more accommodating to their authoritarian model that allows them to exert greater economic and military influence in the region, he said.

However, the U.S. and nations in the region want a free and open Indo-Pacific, Shriver said. And that means upholding international law and norms; protecting other countries’ sovereignty no matter how big they are reciprocal trade; and peaceful resolution of disputes.

The U.S. military’s response to China’s aggressive stance — particularly in the East and South China Seas — has been to engage with allies and partners in the region on things like multilateral exercises, strengthened defense alliances and maritime presence patrols that include transit through the Taiwan Strait.

Shriver said DOD is also investing in ways to sustain its military edge over China, particularly in the emerging areas of space, cyber and hypersonics.

The idea behind this investment is to ensure the U.S. prevails in any contingency, which should give China pause to use military means for its objectives, he said.

But Shriver emphasized that the U.S. doors are open to cooperation.