Corruption and Chaos in Venezuela

Posted by: R. Mitchell in In the News April 15, 2019 Comments Off on Corruption and Chaos in Venezuela 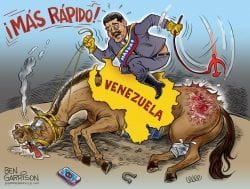 “Maduro usurped power; he’s not the duly elected president. Juan Guaido is the person that the Venezuelan people chose. America and now 54 other nations simply have ratified that, have said, ‘Yep, we recognize that’s what Venezuelans want.’” – U.S. Secretary of State Mike Pompeo, March 19, 2019.

Venezuela’s former regime, led by Nicolas Maduro, has consistently violated the human rights and dignity of its citizens, plundered the country’s natural resources, and driven a once prosperous nation into economic ruin with his authoritarian rule and socialist economic policies. Maduro’s thugs have engaged in extra-judicial killings and torture, taken political prisoners, and severely restricted freedom of speech, all in a brutal effort to retain power.

In this context, Juan Guaido, elected on January 5, 2019, as President of the National Assembly, the only remaining democratically elected and legitimate institution in the country, invoked relevant articles of the Venezuelan constitution and became Venezuela’s Interim President.

Corruption and Chaos in Venezuela is original content from Conservative Daily News – Where Americans go for news, current events and commentary they can trust – Conservative News Website for U.S. News, Political Cartoons and more.

Wake up Right! Subscribe to our Morning Briefing and get the news delivered to your inbox before breakfast!
2019-04-15
+R. Mitchell
Previous: Medal of Honor Monday: Marine Corps Pfc. Harold Gonsalves
Next: Watch Live: President Trump Participates in a Roundtable Discussion on the Economy and Tax Reform