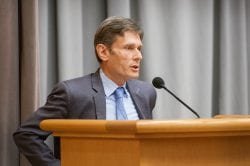 Democratic Rep. Tom Malinowski attempted to defend his stance on illegal immigration by asking his constituents: “Who do you think is mowing our beautiful lawns?” Malinowski is running for a second term in New Jersey’s 7th District which is considered a swing district.

Malinowski was at a “coffee with your congressman” event when he decided to tell the attendees, “There are a lot of jobs in our community, that like it or not, for better or for worse, Americans are not willing to take.”

While at Café Brio, located in a wealthy New Jersey suburb. Malinowski said that kids are not wanting to do specific jobs and would rather go into “robotics” than mow lawns.

After a person in the audience said he works at a company that instructs children in coding, Malinowski responded, “You’re a bunch of elitists! You’re not going to mow lawns.”

As of 2016, there were a listed 475,000 undocumented immigrants in New Jersey. This makes the state ranked with the 5th highest population of illegal immigrants.

There are currently three GOP candidates who are competing to see who takes on Malinowski on the 2020 ballot. The District they are vying for is a swing district that had previously been held by the GOP. Malinowski, along with 120 other House Democrats, supports the action of impeachment proceedings against President Trump.

Just imagine the media and cultural hysteria that would have ensued if Tom Malinowski was a Republican instead of a Democrat. The pure hypocrisy that oozes from situations like these is staggering.

Earlier this year we watched as it was uncovered that two Virginia Democrats, Gov. Ralph Northam, and state attorney general, Mark Herring, both were outed as having participated in blackface. It was shown in a yearbook a picture of what appears to be Northam wearing blackface standing next to a man in a Klan hood. Herring admitted he dressed in blackface in 1980.

Another Democratic governor, Justin Fairfax, was accused of sexual assault by not just one woman but by two separate women. Of course, there were massive protests and supporters of the Me Too movement out supporting the sexual assault accusers, just like was done with Brett Kavanaugh. Oh wait, no none of that happened. We are told to believe all women, but just not the women who make leftist politicians look bad. Evidence and due process only matter if you loathe Republicans.

Megyn Kelly, who is an independent, had here career and reputation demolished after she asked a question about blackface as it related to Halloween costumes.

Once again, if the two Virginia Democrats were actually Republicans, the outrage and outcomes of their careers would have been much different.

Back in 2015, a co-host on the view, Kelly Osbourne, made the statement, “If you kick every Latino out of this country then who is going to be cleaning your toilets, Donald Trump?”

This came on the heels of Osbourne viciously attacked her co-star on the show Fashion Police, Giuliana Rancic. Rancic made a joking comment about hippie culture in connection to actress Zendaya’s fashion choice. Both Osbourne and Zendaya lashed out and called Rancic racist.

Rancic is married to season 1 winner of The Apprentice, Bill Rancic, which was hosted by Donald Trump. Osbourne has been a huge critic of the President and continues to bash him publically. However, the criticism over Osbourne’s comments on Latino’s cleaning toilets was short-lived, and no real push back was incited.

Democrats and Republicans have been battling over illegal immigration for some time. While many on the right seek to preserve the sovereignty of our nation by protecting our borders, those on the left adamantly disagree. Many democrats are stunting for open borders and even wanting to allow illegal immigrants the right to vote and access to free health care.

The majority of illegal immigrants who apply for asylum remain in the U.S. indefinitely after their claims are rejected in court.

While President Trump has been continually fighting to make good on his campaign promise to build a border wall, those opposed have been fighting him at every turn.

Since the Russia collusion narrative has been debunked time and time again, the new mantra the left is vigorously pursuing and calling almost every conservative under the sun a racist. Apparently, I’m a racist, President Trump’s a racist, and you who are reading this are probably racists.

It has gotten to the point where if you have conservative values and dare to disagree with policies or ideologies from those on the left, you are automatically targeted as having some racial reasoning behind it.

If you criticize Ilhan Omar’s or Rashida Tlaib’s anti-Semitic rhetoric, you are in danger of being labeled anti-Muslim or racially insensitive.

Candace Owens, who is the leader of Blexit, wrote on Twitter, “Stop defending these racists.” This was in reference to the Squad, which is comprised of four democratic congresswomen which include Omar and Tlaib. Owens also wrote, “They’ve ignored @AOC’s multiple RACIST attacks on ANY white person that questions her.”

Owens has become well known for suggesting that black people don’t have to vote democrat, and she aims to introduce conservative values to urban society.

The interesting thing is Democrats who are calling those who disagree with them are the ones who are portraying racist behaviors themselves.

Michelle Malkin, a conservative writer, and commentator is often called a “white supremacist” for warning about illegal immigration and the implications of such. The ironic thing is, Malkin has brown skin and is of Filipino descent. Her ideas go against mainstream progressives’ so, in turn, she is a danger to their malignant mission.

It seems Malkin put it perfectly when she said, “Liberals see racism where it doesn’t exist, fabricate it when they can’t find it and ignore it within their own ranks.”

When it comes to the topic of race, the left seems to embrace the differences between us to stir strife and conflict. If we instead unify as one people, as American people, we have the potential to continue to thrive and keep our country great.

Dem. Tom Malinowski: We need illegal immigrants because they ‘mow our beautiful lawns’ is original content from Conservative Daily News – Where Americans go for news, current events and commentary they can trust – Conservative News Website for U.S. News, Political Cartoons and more.