Posted by: R. Mitchell in In the News February 11, 2019 Comments Off on Democrats, Republicans Reach ‘Agreement In Principle’ On Border Wall Funding 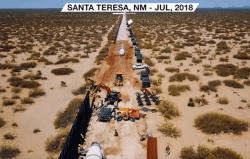 Congressional Democrats and Republicans have reached an “agreement in principle” on proposed border security funding just days away from another potential shutdown.

Sen. Richard Shelby (R-AL) told reporters that he believes Trump will approve the compromise, according to a Fox News report.

“We think it’s going to work,” he said. “We had some hard negotiations.”

The two major points of contention have been how much money will be approved for physical barriers and how many placing a cap on the number of illegal aliens ICE may hold in custody at any given time.

According to a report, the tentative deal provides $1.375 billion for 55 miles of physical barriers at the U.S. – Mexico Border, much less than border agencies had requested. The congressional aide that leaded the details was also sure to mention that there was no money for a wall. The definition of what types of barriers are funded is left to the imagination at this time.

Both houses must pass funding measures by midnight Friday to avoid another partial government shutdown.