DoD: Here’s What We’ll Do to Stop Iranian Aggression

Posted by: Jim Garamone in In the News September 20, 2019 Comments Off on DoD: Here’s What We’ll Do to Stop Iranian Aggression 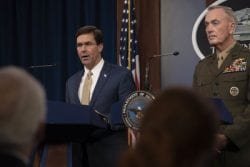 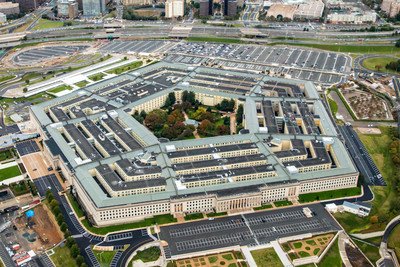 Defense leaders announced the steps the United States will take to deter Iran’s continued aggressive and malign behavior in the Persian Gulf.

At a Pentagon news conference today after White House meetings, Defense Secretary Dr. Mark T. Esper and Marine Corps Gen. Joe Dunford, the chairman of the Joint Chiefs of Staff, also called on other nations to condemn the Iranian attacks on Saudi Arabia, and to help protect the critical Saudi oil infrastructure.

“The Iranian regime is waging a deliberate campaign to destabilize the Middle East and impose costs on the international economy,” Esper said.

Iran has increased its military activity in the Persian Gulf, placing mines on oil tankers and seizing a British oil tanker. Iran shot down an American unmanned aerial vehicle operating in international airspace. All this pales in comparison to the Sept. 14 attacks on Saudi Arabian oil facilities. Esper said the drone and cruise missile attacks on the oil facilities represent a dramatic escalation of Iranian aggression.

“It is clear based on detailed exploitation by Saudi, United States and other international investigative teams that the weapons used in the attack were Iranian-produced and not launched from Yemen,” Esper said. “All indications are that Iran was responsible for the attack.”

The United States will protect its citizens and interests in the region. “The international community has a responsibility to protect the global economy and international rules and norms,” Esper said. “It is clear based on detailed exploitation by Saudi, United States and other international investigative teams that the weapons used in the attack were Iranian-produced and not launched from Yemen.”

Iran threatens these rules with its violence. Saudi Arabia and the United Arab Emirates asked the United States for support to protect critical infrastructure, and President Donald J. Trump has approved deployment of U.S. forces to the region. The forces will be defensive and focused on air and missile defense, Esper said. “We will also work to speed the delivery of military equipment to Saudi Arabia and the UAE to enhance their ability to defend themselves,” he added.

Esper said the support will send a clear message that the United States supports its partners in the region, will help ensure the free flow of resources necessary for the health of the global economy, and will demonstrate America’s commitment to the rules-based order.

Dunford said the request from Saudi Arabia came in this morning via Secretary of State Michael R. Pompeo. The chairman said he will discuss the request with Marine Corps Gen. Frank McKenzie, the commander of U.S. Central Command, and will be in a better position next week to announce the types of capabilities that will be deployed and the numbers of troops that will accompany them. The number of troops would probably be in the hundreds, Dunford said.

DoD: Here’s What We’ll Do to Stop Iranian Aggression is original content from Conservative Daily News – Where Americans go for news, current events and commentary they can trust – Conservative News Website for U.S. News, Political Cartoons and more.