Posted by: R. Mitchell in In the News February 28, 2019 Comments Off on DOT Fines Delta Air Lines and American Airlines for Violating Tarmac Delay Rule 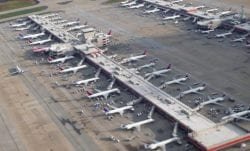 DOT’s Aviation Enforcement Office investigation revealed that ten domestic and three international flights operated by American at various airports throughout the United States violated the Department’s tarmac delay rule between December 2015 and January 2017.  The Enforcement Office also found that eleven flights operated by Delta violated the Department’s tarmac delay rule between January 2017 and February 2018.  Penalties for violations of the tarmac delay rule vary based on the facts and circumstances in the case, including, but not limited to, the consumer harm, the number of violations, and the violator’s compliance disposition and enforcement history.  More information about the specific lengthy tarmac delays can be found in the consent orders, available at www.regulations.gov, docket number DOT-OST-2019-0001.

Wake up Right! Subscribe to our Morning Briefing and get the news delivered to your inbox before breakfast!
2019-02-28
+R. Mitchell
Previous: The Army Career of Dr. Seuss
Next: Members of Congress Refer Michael Cohen to Justice Department for Lying to Congress … again