Posted by: R. Mitchell in In the News August 8, 2019 Comments Off on Dulles CBP Seize Ecstasy Shipments Destined for New York and Florida 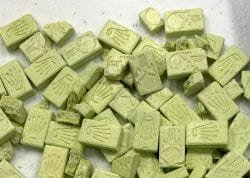 Officers inspected three parcels that arrived in air cargo from London, England and discovered a combined 325 light green and yellow pills stamped with the “Punisher” skull logo on one side and a crown symbol on the reverse side. Officers field-tested a sampling of the pills and those tests proved positive for MDMA, more commonly known as ecstasy or molly.

The combined weight of the ecstasy pills was 198.7 grams or a little more than seven ounces. It has a street value of approximately $20,000.

“This is an exceptional example of Customs and Border Protection officers exercising experience and intuition to intercept illicit and dangerous drugs at our nation’s ports of entry,” said Casey Durst, CBP’s Director of the Baltimore Field Office. “Narcotics interdiction remains a CBP enforcement priority, and is one way in which we help to keep our communities safe.”

The parcels were destined to addresses in Winter Park and Fort Lauderdale, Fla., and in East Syracuse, N.Y.

According to the National Institute on Drug Abuse, MDMA is a mood-altering synthetic hallucinogen. High doses of MDMA can affect the body’s ability to regulate temperature. This can lead to a spike in body temperature that can occasionally result in liver, kidney, or heart failure or even death. The DEA lists MDMA as a Schedule 1 drug under the Controlled Substances Act, the most restrictive class of drugs.

During a typical day, CBP officers and agents across the country seize 4,657 pounds of illicit drugs along our nation’s borders and at our ports of entry. Learn more about what CBP’s accomplished during “A Typical Day in 2018.”