Posted by: Amalia White in In the News June 7, 2019 Comments Off on Elite Democrats’ Efforts Have Colorado Singing the Blues 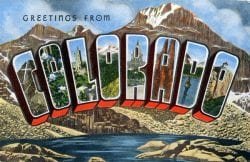 Colorado’s legendary natural wonders, majestic mountains, quaint small towns, and large vibrant cities are just a few aspects of why I feel lucky to have called this state home for my entire 24 years of life. While geographically Colorado is beautiful, this state’s continuous progressive shifting has many residents wondering if their state is becoming the new California.

Colorado’s newly elected Democratic governor, Jared Polis, is not wasting any time enacting his progressive agendas into law. Polis has caused statewide concern with a major crackdown on the oil-and-gas industry; a red-flag firearms measure, and an LGBT sex-education bill that would eliminate charter-school opt-outs. The “Equal Pay For Equal Work Act,” was recently signed into law by Polis which would allow for the suing of their employers for anyone who just assumes they are being paid less due to their gender. This all comes after he signed the new state law that ties the state’s Electoral College votes to the presidential candidate who wins the majority votes across the nation.

However, this blue onslaught on the “Centennial State” did not originate with Gov. Polis’ recent political reign shift. This agenda to turn once red Colorado blue has an intriguing deep history. It’s a disturbing tale of how wealthy liberal progressives meticulously planned to take over a historically red state by shifting it to purple and then blue.

The film, “Rocky Mountain Heist,” originally debuted in 2014 and told the story of how a wealthy group of liberal elites in Colorado seized the once red state by fraternizing with wealthy patrons and out-of-state special interest groups.

READ  The Case of Greta Thunberg: Political Agendas Are No Child’s Play

The film, produced by David Bossie’s Citizens United and directed by Jason Killian Meath, uncovers “The Gang of Four,” which was made up of millionaires and billionaires Tim Gill, Rutt Bridges, Pat Stryker, and current Colorado governor Jarod Polis.

A fellow adopted Coloradan, journalist Michelle Malkin, hosted the documentary and wrote, “The nearly-hour-long film illustrates how the Gang of Four coordinated their campaign targets and spending behind closed doors. We report on how they drafted up elitist plans to “educate the idiots.” “Rocky Mountain Heist” traces how the liberal scions and their “Colorado Democracy Alliance” captured the governor’s mansion, the state legislature, and two Senate seats.”

This so-called “Colorado model” was so successful for leftist political activism that it inspired similar efforts in many other states.

The last time there was a Republican in the Colorado governor’s mansion was with Republican Bill Owens over a decade ago. The days when Colorado was considered a swing state are no more.

So has the Democrats’ massive blue wave swept away every bit of red left? Not completely.

Several progressive ballot initiatives that would raise taxes, including Prop 73 (increasing taxes to pay for education) and Prop 110 (raising sales taxes to pay for transportation) were struck down by voters.

Unaffiliated voters are Colorado’s largest single group of voters. This past midterm election made history when unaffiliated voters in Colorado cast more ballots than either major political party and secured victories for Democratic candidates.

While Polling has shown that Colorado’s unaffiliated voters don’t like President Trump, the substantial number of independent votes could possibly be swayed in Republicans’ favor if the cards are played right. About half of all registered voters in the state 25 years old or younger are unaffiliated so focusing efforts on educating the younger generation on important issues could be a key loophole.

While little hope still stands for Colorado to turn back to its red ways, any fellow Coloradan who is willing to wake up and fight every day to try and keep our state free and out of the clutches of elite political tyrants has my respect.

Wake up Right! Subscribe to our Morning Briefing and get the news delivered to your inbox before breakfast!
2019-06-07
Amalia White
Previous: President Donald Trump’s Schedule for Friday, June 7, 2019
Next: ICE arrests 32 illegal aliens during 5-day operation in New England