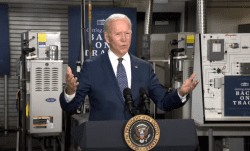 President Biden and the First Lady Deliver Remarks at Tidewater Community College during which the president promised that lower and middle-income earners would not pay any additional taxes under his massive tax and spend plan nor would his plan raise the deficit.

As his plan relies heavily on a massive increase to corporate taxes, those taxes will be passed on to consumers as the only money retail, travel, hospitality and manufacturing corporations make come from sales. Lower and middle-income consumers will have to pay an increased share of their income to pay the taxes passed on to them through higher prices. This effect and the higher corporate tax rate is expected to cause a drop in GDP of 1.62% which will negatively impact jobs and wages.

Analysis shows that the plans will raise $3.3 billion over ten years in a static model – the government’s model of choice that never gets it right. But when put in a more statistically correct dynamic model, his plan would raise only about $2.8 trillion.

Biden’s two new spending proposals will spend more than $4 trillion over the next 4-5 years – $2.3 trillion for the ‘American Jobs Plan’ and $1.8 trillion in the ‘American Families Plan’. This is on top of the $1.9 trillion spent in the ‘American Rescue Plan’ that has already been made law.

$2.8 trillion in revenue over 10 years to pay for more than $6 trillion in spending in the near term is not revenue neutral – by any measure.