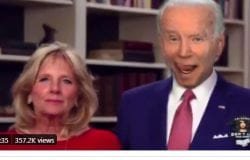 This story pretty much writes itself. Who doesn’t know that Politifact is a left-wing slanted, Democrat agenda-driven mess?

Well, if you just got back to civilization after a decade on a deserted island, this should pretty much sum up how useless Politifact is – they are now fact-checking internet memes. You know… satirical photos and videos meant to bring attention to a subject through humor, wit, and art. But if that subject is a Democrat… oh Politifact is on the case.

So how did Politifascist respond?

Solmemes’ video is labeled as comedy on YouTube, but it’s an example of what the Washington Post Fact Checker calls “doctoring.” That entails “cropping, changing speed, using Photoshop, dubbing audio, or adding or deleting visual information” to deceive the viewer.

The clip of the Bidens is the latest example of manipulated videos on the 2020 campaign trail. Both Biden and Trump have published deceptively edited campaign videos attacking one another. In those cases, the ads used clips that omitted context. They did not transform footage altogether as this widely shared altered video does.

The Facebook video is inaccurate and ridiculous. We rate it Pants on Fire!

Wow… Of course it’s manipulated video you moron – that’s what memes are.

Now, why is Politifascist going after Solmemes? It’s probably because the left can’t meme, I mean… how stupid is this attempt by the memer (meme2020) that the Democrats, errr, the Lincoln Project picked:

So that gets back to the real reason Politifascist attacked Solmemes’ art:

They really stink at this and can’t hold a candle to what she, and other Conservative meme-masters put out just about every day.

The best part of this is… due to Politifascist’s idiotic attempt at fact-checking, this meme and its creator are getting more attention than ever.

‘Fact-Checking’ an Internet Meme Proves Politifact is a Joke is original content from Conservative Daily News – Where Americans go for news, current events and commentary they can trust – Conservative News Website for U.S. News, Political Cartoons and more.