Posted by: R. Mitchell in In the News February 22, 2019 Comments Off on Georgia CBP Officers Intercept $19 Million Cocaine Shipment 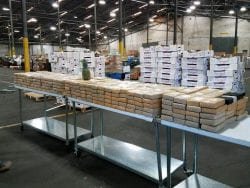 “This was an outstanding interception of narcotics by our CBP officers, “said Lisa Beth Savannah CBP Area Port Director. “This seizure is a positive enforcement action against drug smuggling organizations and highlights the important work our officers do each day to stop illegal activity at our borders and ports of entry.”

The discovery of narcotics by CBP officers within a commercial shipment of fresh pineapples has an estimated street value of $19,114,940.00 and this seizure remains under investigation.

CBP conducts operations at ports of entry throughout the United States, and regularly screens arriving international passengers and cargo for narcotics, weapons, and other restricted or prohibited products. On a typical day nationally, CBP seizes over 5,000 pounds of drugs.

READ  A Podcast of Life-Changing Stories
Wake up Right! Subscribe to our Morning Briefing and get the news delivered to your inbox before breakfast!
2019-02-22
+R. Mitchell
Previous: President Donald Trump’s Schedule for Friday, February 22, 2019
Next: Defense Department Awards $10 Million in Funding to Digital Manufacturing and Design Innovation Institute