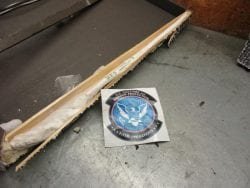 The shipment, originating from Ocotepec, Mexico and en route to a residence in Chicago, was manifested as Handmade Wooden Picture Gifts and weighed 52 lbs. Upon examination, two large religious artwork pieces were observed.  The pieces were x-rayed and anomalies were discovered inside the frames. CBP officers were able test some of the powder, which came back as Acrylfentanyl. Due to safety reasons and spillage, further extraction was not attempted.

“This narcotic is not only dangerous to the user, it is very dangerous to our officers,” said Thomas Mahn, Port Director, Louisville. “Our officers take every precaution with every shipment they inspect. Our officers worked diligently to stop this parcel from reaching its destination and we are very relieved no one was seriously injured during this seizure.”

There have recently been incorrect and misleading news reports about Acrylfentanyl. These reports call the drug  a “new” fentanyl analogue, say it’s ”extremely powerful” and imply it can render naloxone ineffective.

Fentanyl and its analogues, including Acrylfentanyl, are synthetic opioids that bind to and activate the opioid receptors in the brain creating analgesic and euphoric effects. Compared to other opioid medications, most types of fentanyl are extremely powerful. Acrylfentanyl is not a new kind of synthetic opioid. Rather, it belongs to the family of fentanyl analogues that are well-known to the medical and law enforcement communities nationwide.

CBP conducts operations at ports of entry throughout the United States, and regularly screens arriving international passengers and cargo for narcotics, weapons, and other restricted or prohibited products. CBP strives to serve as the premier law enforcement agency enhancing the Nation’s safety, security, and prosperity through collaboration, innovation, and integration.