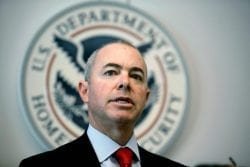 Echoing President Biden’s excuses for the coronavirus response, Homeland Secretary Alejandro Mayorkas blamed the Trump administration for everything happening at the southern border.

In a White House press briefing Monday, Mayorkas repeatedly said that he was having to rebuild the entire immigration system from scratch. Similar to President Biden’s false statement that his administration had to start from scratch on a COVID vaccine.

Secretary Mayorkas also falsely blamed the Trump administration for the separation of immigrant children from adults. That separation began in 1997 under Clinton due to the Flores Consent Decree (Flores v. Reno) and was broadened by an Obama-era 9th Circuit Court of Appeals decision (Flores v. Lynch) that applied Flores to all children whether accompanied or not.

Former President Trump actually signed an executive order in 2018 requiring HHS to keep children with their families “to the extent permitted by law.”

By focusing attention on the previous administration, Mayorkas intends to absolve Biden of any fault for the wave of migrants arriving at the border in hopes of taking advantage of the open borders policies the president promised during the campaign.

Homeland Chief: Situation at the Border is Trump’s Fault is original content from Conservative Daily News – Where Americans go for news, current events and commentary they can trust – Conservative News Website for U.S. News, Political Cartoons and more.

Laredo CBP Officers Seize Methamphetamine Worth Over $2.6 Million at the Juarez-Lincoln Bridge

Kill the Filibuster, Pack the Court, Destroy Our Future