Posted by: David Vergun in In the News September 2, 2019 Comments Off on Labor Day Marks 74th Anniversary of Japan’s WWII Surrender 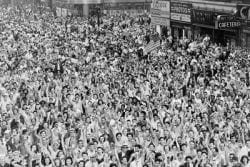 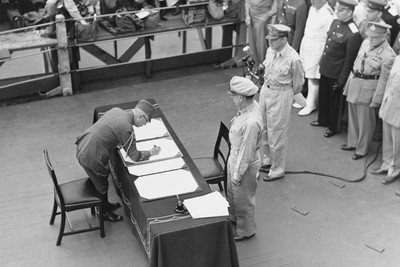 As the United States enjoys its Labor Day holiday, it’s also marking the 74th anniversary of the formal and unconditional surrender of Japan.

V-J Day — short for Victory over Japan Day — is observed in the United States on the anniversary of the formal signing of the Instrument of Surrender aboard the battleship USS Missouri in Japan’s Tokyo Bay on Sept. 2, 1945.

Australia, the Netherlands, New Zealand, Korea and the United Kingdom celebrate Aug. 15, 1V-J Day. On that date in 1945, Japan’s Emperor Hirohito broadcast the surrender to the Japanese people on Radio Tokyo.

China and Taiwan recognize Sept. 2 as V-J Day. The Philippines mark Sept. 3 as V-J Day, because on that date, Japanese Gen. Tomoyuki Yamashita, military governor of Japan to the Philippines, surrendered.

The USS Missouri, where the formal surrender documents were signed,  was Fleet Adm. William Halsey’s flagship for the last weeks of the war. The battleship’s name, Missouri, was also the home state of then-President Harry S. Truman.

The Japanese signatories of the surrender were Foreign Minister Mamoru Shigemitsu and Gen. Yoshijiro Umezu, chief of the army general staff.

The formal ceremony was witnessed by delegates from the other allied nations, including China, the United Kingdom, the Soviet Union, France, Australia, Canada, the Netherlands and New Zealand.

READ  Watch: President Trump Participates in a 1:1 Meeting with the Secretary-General of NATO

Of note, the flag that flew aboard the Missouri that day was the same U.S. flag that flew over the U.S. Capitol on Dec. 7, 1941, the day Japanese forces bombed Pearl Harbor in Hawaii.

On the bulkhead near the ceremony, Navy Commodore Matthew Perry’s 1853 flag was displayed. The significance is that 1853 was the year when the original Treaty of Japan was signed.

The ceremony itself was brief, lasting a mere 30 minutes. A Navy chaplain gave an invocation, and a recording of the national anthem was played. The spectacular, which also included singing, also featured hundreds of American carrier- and land-based airplanes flying over the Missouri as the sun broke through the clouds.

The surrender document is on display in the National Archives in Washington, along with other important documents, such as the Declaration of Independence, the Constitution and the Bill of Rights.

An addendum to the formal signing: the Treaty of San Francisco, which formally ended the state of war between Japan and most allied nations, including the United States, didn’t go into effect until April 28, 1952. That’s also the date that officially ended the American-led Allied occupation of Japan.