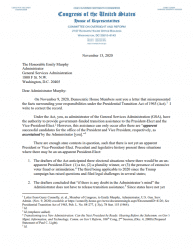 Dear Administrator Murphy:
On November 9, 2020, Democratic House Members sent you a letter that misrepresented the facts surrounding your responsibilities under the Presidential Transition Act of 1963 (Act).1 I write to correct the record.

certified an electoral winner and some states are still tabulating legal ballots, there remains doubt as to the winner; and

According to Congressional intent and past precedent set by President Clinton, as of today, there is no apparent President-Elect.

A GSA spokesman recently stated that “the GSA Administrator ascertains the apparent successful candidate once a winner is clear based on the process laid out in the Constitution.”7

I strongly encourage you to do just that: follow the Constitution and past precedent, not the media, when making your determination of the President-Elect. This democracy relies on a rule of law and the law must be followed.

6 Id.
7 Courtney Buble, GSA Holds the Key to When or If Biden Gets Access to Full Transition Resources, GOV’T EXEC. (Nov. 6, 2020), https://www.govexec.com/management/2020/11/gsa-faces-tricky-decision-ascertaining-electionwinner-formally-kicking-transition/169854/.

Original Images of the Letter

House of Representatives website link to the letter -> https://republicans-oversight.house.gov/wp-content/uploads/2020/11/Letter-to-GSA-re-Transition-final-11.13.20-1.pdf

Letter from Congress Verifying that Joe Biden is NOT President-Elect [Full Text] is original content from Conservative Daily News – Where Americans go for news, current events and commentary they can trust – Conservative News Website for U.S. News, Political Cartoons and more.