Posted by: Joshua Gill in In the News March 4, 2019 Comments Off on Man Ate Nothing But Taco Bell Hot Sauce Packets While Trapped In Snow For Five Days 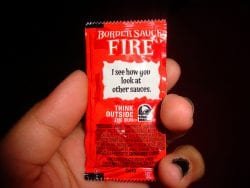 An Oregon man says he survived for five days trapped by heavy snow in his car by eating only Taco Bell hot sauce packets.

Heavy snows trapped Jeremy Taylor and his dog, Ally, in Taylor’s car on a U.S. Forest service road Sunday, February 24 in Sunriver, Oregon, according to Fox5. Taylor and his dog slept in the car and attempted to hike out the next day, but the previous night’s snowfall made the way impassable and forced them to return to the car, where they stayed until Friday, when a snowmobiler discovered them. Taylor said he survived by eating only three Taco Bell hot sauce packets over those five days.

A search and rescue team member rode out to Taylor and Ally after the snowmobiler’s discovery and hauled them out of the woods with a large tractor. The pair were in good condition but were extremely hungry according to local authorities.

Man Ate Nothing But Taco Bell Hot Sauce Packets While Trapped In Snow For Five Days is original content from Conservative Daily News – Where Americans go for news, current events and commentary they can trust – Conservative News Website for U.S. News, Political Cartoons and more.

Wake up Right! Subscribe to our Morning Briefing and get the news delivered to your inbox before breakfast!
READ  Watch Live: President Trump Participates in a Video Call with the Participants of the First All-Women Spacewalk
2019-03-04
Joshua Gill
Previous: SpaceX Docked Its ‘Crew Dragon’ Capsule with the Space Station This Weekend
Next: President Donald Trump’s Schedule for Tuesday, March 5, 2019