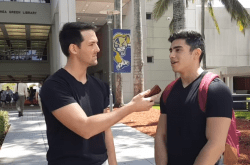 Several University students supported socialism when initially asked, but the response changed drastically when they were asked if the fruits of their hard work at school should become the property of the people.

Campus Reform, in a recent video, asked Florida International University students their views on socialism, and some said they prefer socialism over capitalism.

“Socialism is more geared toward helping the people in your, um, you know, the governed,” a student replied.

But students felt differently when asked about sharing the fruits of the hard work. Specifically, Campus Reform’s Cabot Phillips asked those with high GPAs how they would feel if they had to give some of their points to people at the bottom.

“It would be kind of like hypocritical for me to say no,” one student responded.

“You’re basically profiting off of my work for you, so who’s really the bad guy here?” a different student said.

Rep. Alexandra Ocasio-Cortez (D-NY) and Sen. Bernie Sanders (I-ME), both avowed socialists, believe that the reason more Americans don’t support socialism is that they don’t understand it. Mr. Phillips put it in the clearest terms possible and it looks like the more people understand the failed ideology, the less they like it.

Many Students Who Support Socialism, Wouldn’t … if Their Property Were Being Redistributed is original content from Conservative Daily News – Where Americans go for news, current events and commentary they can trust – Conservative News Website for U.S. News, Political Cartoons and more.