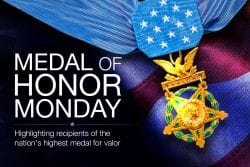 Most Medal of Honor recipients earned the award during combat, but that’s not the case for everyone. Navy Petty Officer 2nd Class Owen Francis Patrick Hammerberg, a boatswain’s mate, is one of the few recipients who earned it for his heroic efforts outside of normal duty.

Hammerberg was born May 31, 1920, and grew up on Michigan’s Upper Peninsula. His family moved around and landed in Flint during Hammerberg’s teen years. He dropped out of high school, hitchhiked west and worked on a ranch before joining the Navy on July 16, 1941, when he was 21.

After basic training, Hammerberg was assigned to the USS Idaho and USS Advent. While on the Advent, Hammerberg became known for an incident in which he dove into the water to free a cable that had been tangled in a mine. It could have caused an explosion, but Hammerberg’s actions prevented that.

After his heroics in the water, Hammerberg went to Navy dive school. He completed the training and was assigned to Pacific Fleet Salvage Force, Mobile Diving Salvage Unit 1 in Pearl Harbor, Hawaii.

Hammerberg earned the Medal of Honor for his actions on Feb. 17, 1945, but before we get to that, it’s important to mention what led to it — an incident known as the West Loch Disaster.

Pearl Harbor’s West Loch was an area that had been spared from damage during the Dec. 7, 1941, Japanese attacks. In May 1944, several ships were moored there, all of which were loaded with ammunition and fuel for an upcoming mission in the Pacific. On May 21, one of those ships mysteriously blew up, causing a chain-reaction explosion that set several other ships on fire. The Navy was forced to sink several of them so they didn’t put more nearby ships in danger.

The following February, the Navy called in five dive teams to raise the hulks and clear the channel. Hammerberg and his team were able to raise their assigned ship without any issues, but another team didn’t have that luck. As the two divers tunneled under a ship that had sunk in 40 feet of water and 20 feet of mud, they got trapped in steel and cables. Attempts by other divers to reach them made the waters even muddier, so even a special diving team wouldn’t risk the mission.

A call for volunteer divers went out, and Hammerberg responded. He pushed his way into the black, muddy waters to find the stranded men, despite serious concerns about cave-ins and jagged pieces of debris tearing his lifeline.

Working in complete darkness, it took Hammerberg five hours to find and free George Fuller, the first of the trapped men. “Fuller, who had been pinned by a steel plate, shook Hammerberg’s hand underwater before heading to the surface for safety,” congressional records state.

Hammerberg was tired from the effort, but he continued to push his way through the buried wreckage to find the second diver, Earl Brown, whom he located about 18 hours after the rescue mission began. At the same time, though, a cave-in occurred, causing a heavy piece of steel to pin Hammerberg on top of Brown. Hammerberg was crushed to death, but Brown survived because he was protected by Hammerberg’s body.

For giving his life to save another, Hammerberg received the Medal of Honor. His parents accepted it on his behalf the same month he died. The 23-year-old was buried in Holy Sepulchre Cemetery in Southfield, Michigan.

The young diver has not been forgotten. In 1954, the Navy named a destroyer escort, the USS Hammerberg, in his honor. It was christened by his mother. Around the same time, Hammerberg Road was dedicated in Flint, Michigan, and a Detroit park was named for him.

In 2005, a large monument was dedicated for Hammerberg near Veterans of Foreign Wars Post 5966 in Menominee, Michigan. The Medal of Honor recipient’s medals and uniform are also on display at the Michigan Heroes Museum in Frankenmuth, Michigan.