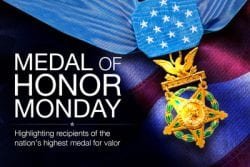 The American Civil War accounts for 1,522 Medal of Honor recipients — nearly half of the total who have earned the award since its creation in 1861. One of those recipients was Union Army Pvt. George Maynard, who refused to leave a man behind during a lopsided fight.

Maynard was born in a suburb of Boston in 1836 and attended public school until he was 15, when he became a jeweler’s apprentice. He continued in that profession until he was 25 and joined the 13th Regiment Massachusetts Volunteer Infantry at the onset of the Civil War.

The 13th was sent south to patrol the Upper Potomac River along the Maryland-Virginia border, and they fought in many early battles, including the Second Battle of Bull Run, Chantilly and Antietam, the bloodiest battle of the war.

On Dec. 12, 1862, Maynard’s regiment crossed the Rappahannock River in preparation for the Battle of Fredericksburg, which is known to be one of the most one-sided battles of the war in favor of the Confederates. According to the American Battlefield Trust, the most decisive fighting took place in an area known as Slaughter Pen Farm, where Union soldiers managed to puncture the Confederate lines before being pushed back by a counterassault.

Maynard’s regiment was among the first units to advance on the southern fighters there, but his division’s main line of advance eventually pushed past their position, so his company fell back to regroup. That’s when Maynard realized that a fellow soldier, Charles Armstrong, hadn’t returned with them.

Without thinking of the consequences, Maynard ran back into the fight to find him. He eventually did, and despite hostile fire all around him, got Armstrong out of harm’s way and to a Union field hospital. Unfortunately, Armstrong didn’t survive his injuries.

The 13th was mustered out of service by February 1863, so Maynard left the Army. A little more than a year later, though, he returned with a commission as a captain in the 82nd U.S. Colored Infantry, which took part in the siege and battle of Fort Blakely, Alabama. About a year after that, Maynard was promoted to the rank of major in recognition of all his efforts over the years.

Maynard left military service permanently in September 1866 and went back to Boston, where he married and had children. On March 20, 1898, he received the Medal of Honor for his actions at Fredericksburg.

Maynard lived to the age of 91 and died in 1927, but his legacy lives on. His Medal of Honor and military uniform are on display at Boston’s famed Faneuil Hall, along with a painting depicting his actions that earned him the nation’s highest honor.

In his retirement, Maynard was an active member of the Ancient and Honorable Artillery Company of Massachusetts, the oldest chartered military organization in America. Every year, members of that group hold a ceremonial wreath-laying at his grave.

Faith and Reason: Why the West Has Been So Successful

Report: Trust in the media is at an all-time low