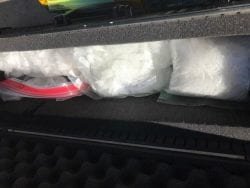 The incident occurred at approximately 5:30 p.m., when a man driving a 2019 gray Jeep Grand Cherokee along with a male passenger approached the checkpoint for inspection.  A Border Patrol canine detection team alerted to the vehicle.  Agents sent the vehicle to secondary inspection for further investigation.

A search of the vehicle revealed two black boxes containing several plastic packages hidden inside the passenger’s foot well and another in the rear cargo area.  The substance inside the packages tested positive for the characteristics of methamphetamine.

The total weight of the methamphetamine was 2.78 pounds; agents also discovered 9.7 grams of black tar heroin. The total value of both narcotics combined has an estimated street value of $6,282.

Teachers Unions Are Again Flexing Their Political Muscle, This Time…