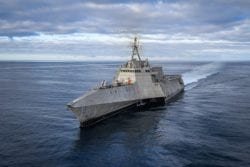 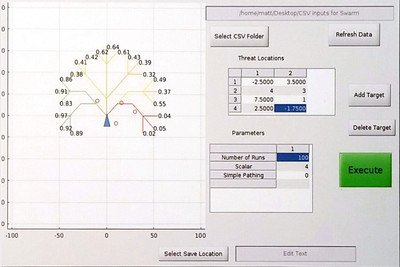 If you’ve ever walked through a cloud of gnats, you’ll know what a nuisance a swarm can be.

On the sea, Navy vessels occasionally encounter swarms as well, in the form of tiny, less-than-friendly enemy boats. Navy destroyers, cruisers and littoral combat ships are powerful weapon systems, but a dozen or more tiny boats, each with a cache of weapons, can be a problem for large, less-agile vessels. And big Navy ships are not optimized to fight dozens of boats shooting from different angles.

That kind of problem is why Matt Ward, a researcher with the Naval Surface Warfare Center at Port Hueneme, California, is developing “SWARM-Tac.” He explained the motive for the project during Defense Department Lab Day at the Pentagon, April 25.

“Some of our adversaries use lots of small boats to kind of harass our ships,” Ward said. “While we have a single, high-capability ship, they will have a lot of these small craft that may not have as [powerful] weapons, but just a significant number of them. What [we’re] trying to do is use machine learning and artificial intelligence to generate tactics for the ship to maximize its probability of success against that type of an attack.”

SWARM-Tac is software, Ward said. The AI-driven technology ingests sensor information already available on a Navy ship — radar and other things used to give sailors situational awareness of what’s going on around them, as well as information about the ship itself, its available weapons, and the number of attackers.

The software synthesizes all that information into solutions — and determines the probability for success of those solutions if chosen — for how to evade or destroy a nasty swarm of enemy boats.

Ward said that although SWARM-Tac is still in the development phase, an at-sea test conducted last year using a ship similar to a U.S. Navy vessel yielded “pretty good results.”

Navy Could Use AI to Combat Swarms of Enemy Boats is original content from Conservative Daily News – Where Americans go for news, current events and commentary they can trust – Conservative News Website for U.S. News, Political Cartoons and more.