Posted by: C. Todd Lopez in In the News December 6, 2019 Comments Off on No Plans to Leave Iraq, Defense Official Says 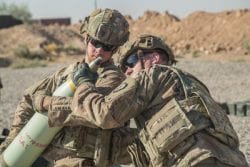 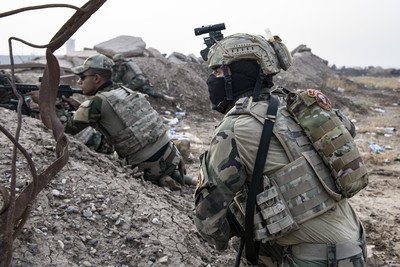 “Our intention is to stay. Do we plan to change the posture of U.S. forces? Not at this time,” said John C. Rood, who spoke yesterday during a Defense Writers Group meeting in Washington.

“We are very clear that we are there with the permission of the Iraqi government,” Rood said. “And that is a necessary condition for U.S. forces to be there.”

U.S. military initiatives in Iraq have been effective, he said. Those initiatives include helping Iraqi military forces build their capabilities, providing other types of assistance and also assisting with the conduct of the fight against ISIS.

“ISIS at one time occupied and controlled large swaths of Iraqi territory,” Rood said. “The fight against ISIS is not done. There are still a substantial number of ISIS fighters there. And the Iraqi government knows that and they really value — and I heard this directly from them — the partnership with U.S. forces, the partnership with the U.S. military in addressing that.”

Protests in Iraq, which kicked off in October, have been met in some cases with violence on the part of the Iraqi government, he said. This is something that Rood said the U.S. has addressed.

“Obviously, the violence occurring in the protests and against the protestors is also something we persistently express concerns about, directly, and I did, to the Iraqi leadership,” he said. “We’ve made no secret of the fact we’d like to see greater restraint exercised in terms of the use of violence there.”

Rood also said, however, he finds the tone of those protests to be noteworthy — especially in the national identity being expressed by the Iraqi population.

“There is an Iraqi identity that is evident in the protests and in the reaction to them throughout the country that is more pronounced, I think, than most Iraq observers have seen in recent months and years,” he said. “[It’s] an Iraqi identity and a willingness and a desire to be a state that stands on its own two feet to a greater extent, and a reaction against some of the negative Iranian influence, the influence of other countries trying to interfere in internal Iraqi activities.”

Wake up Right! Subscribe to our Morning Briefing and get the news delivered to your inbox before breakfast!
2019-12-06
C. Todd Lopez
Previous: Trial Balloon – Al Goodwyn Cartoon
Next: Abuse of Power – A.F. Branco Cartoon