Posted by: R. Mitchell in In the News February 28, 2019 Comments Off on Nogales Border Officers Seize Nearly $2.5 Million in Drugs 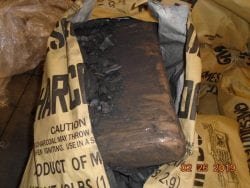 Officers referred a tractor-trailer being driven by a 35-year-old Mexican national when he attempted to enter the United States through the Mariposa commercial facility, Tuesday afternoon. A CBP narcotics detection canine alerted officers to 190 bundles of marijuana concealed within a shipment of charcoal. The drugs are identified as more than 2900 pounds of marijuana with a value of approximately $1.5M.

Wednesday afternoon, officers referred a tractor-trailer being driven by a 48-year-old Mexican national when he attempted to enter the United States also through the Mariposa commercial facility. A search of the empty trailer by a CBP canine alerted to more than 300 packages of methamphetamine within a floor compartment. The drugs weighed more than 360 pounds, with an estimated value of nearly $1.1M.

Officers seized both tractor trailers and the drugs. Both drivers were arrested and turned over to U.S. Immigration and Customs Enforcement’s Homeland Security Investigations.