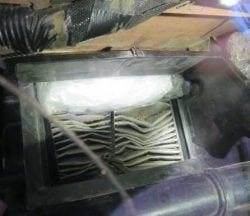 CBP Officers at the Mariposa Crossing referred a 22-year-old Tucson man for further inspection of his Buick SUV when he attempted to enter the U.S. from Mexico Tuesday morning. After a CBP narcotics detection canine alerted to a scent it is trained to detect, officers removed more than 50 packages from the vehicle’s dashboard. The packages were identified as more than 52 pounds of meth, with an estimated value of more than $157,000.

Officers seized the drugs and vehicle. The subject was arrested and then turned over to U.S. Immigration and Customs Enforcement’s Homeland Security Investigations.