Posted by: David Vergun in In the News July 1, 2019 Comments Off on President Praises U.S. Military, Families in S. Korea 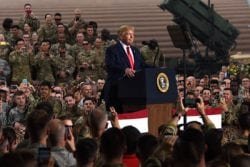 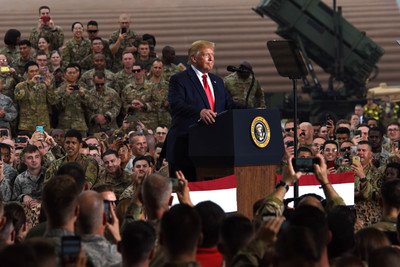 The hearts of 330 million Americans beat with gratitude for the selfless service of U.S. forces serving in South Korea, President Donald J. Trump said during a visit to Osan Air Base, South Korea.

Trump spoke to service members assembled in an Osan hangar yesterday as part of his visit to the region to attend the G-20 financial summit.

A number of family members were also in attendance, and Trump recognized them as well. “Those families and those spouses, they keep you going. … America is forever grateful for your service and for your devotion,” he said.

The president specifically recognized Jamie Waterbury, wife of Air Force Master Sgt. Cole Waterbury. She recently earned the Presidential Lifetime Achievement award for her 4,000 hours of volunteer work on behalf of the military community, he noted. “That’s incredible. Jamie, you embody the greatness of America’s military families and we want to thank you,” he said.

Trump also recognized Master Sgt. Hunter Lindblad of the 7th Air Force, who was born in the South Korean capital of Seoul and was adopted by an American family when he was 5 months old.

Twenty-five years later, in 2010, Hunter returned to South Korea for the first time, as an “intrepid airman” of the U.S. Air Force, Trump said. He is now completing his third tour of duty in South Korea, doing “an incredible job [as a] planner, helping our forces to achieve unrivaled skill, precision and speed.”

“Hunter, your story exemplifies the enduring bonds between the American and South Korean people,” he added.

The president also recognized Capt. Jin Lee, who grew up near Pohang, South Korea. At age 13, he immigrated to the United States, became an American citizen, and after college, joined the Air Force.

When he was a child in Korea, Trump said, Jin heard stories about the “righteous might” of American warriors. He liked those stories, the president said, and so he joined. “You make us all proud,” he told Lee.

The president also recognized soldiers of the 2nd Infantry Division/Republic of Korea U.S. Combined Division, for their efforts at fighting wildfires northeast of Seoul in April. “Your valiant actions helped save thousands of homes and countless numbers of lives,” he said.

Addressing all who serve, Trump recognized their selflessness and fortitude: “Our nation will never forget the sacrifices of every American service member here today and those stationed throughout the world,” he said. “No force on Earth can match the courage, the spirit, virtue, the grit of the American soldier, sailor, airman, Marine.”

Wake up Right! Subscribe to our Morning Briefing and get the news delivered to your inbox before breakfast!
2019-07-01
David Vergun
Previous: Watch: Making Marine Snipers
Next: Do’s and Don’ts for Displaying Old Glory