Posted by: David Vergun in In the News March 21, 2019 Comments Off on Rosie the Riveter Inspired Women to Serve in World War II 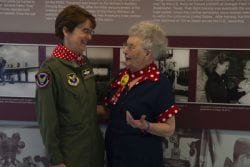 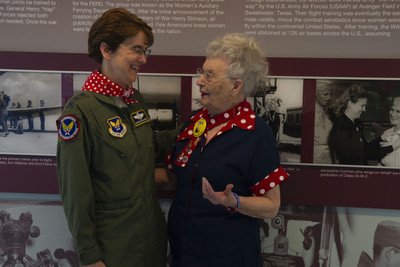 “Rosie the Riveter” was an iconic poster of a female factory worker flexing her muscle, exhorting other women to join the World War II effort with the declaration that “We Can Do It!”

Mae Krier, 93, an original Rosie the Riveter, worked at Boeing aircraft, producing B-17s and B-29s for the war effort from 1943 to 1945 in Seattle. She is advocating Congress for getting March 21 recognized annually as a Rosie the Riveter Day of Remembrance. Saying she wants to inspire a “We Can Do It!” attitude among young girls everywhere, she also is advocating that Congress award the Rosies the Congressional Gold Medal for their service.

Did you know Rosie’s cultural impact went far beyond the poster itself?

American women played important roles during World War II, both at home and in uniform. Around 5 million civilian women served in the defense industry and elsewhere in the commercial sector during World War II with the aim of freeing a man to fight.

Some women served near the front lines in the Army Nurse Corps, where 16 were killed as a result of direct enemy fire. Sixty-eight American service women were captured as prisoners of war in the Philippines. More than 1,600 nurses were decorated for bravery under fire and meritorious service, and 565 WACs in the Pacific Theater won combat decorations. Nurses were in Normandy on D-plus-four.

Rosie the Riveter Inspired Women to Serve in World War II is original content from Conservative Daily News – Where Americans go for news, current events and commentary they can trust – Conservative News Website for U.S. News, Political Cartoons and more.

Wake up Right! Subscribe to our Morning Briefing and get the news delivered to your inbox before breakfast!
2019-03-21
David Vergun
Previous: Multi-Agency Seaport Operation Nets more than Half-Ton of Cocaine
Next: Treasury Designates Two More Shipping Companies for Attempted Evasion of North Korea Sanctions