Posted by: R. Mitchell in In the News September 12, 2019 Comments Off on San Diego Sector Sees Success with Decrease in Illegal Entries 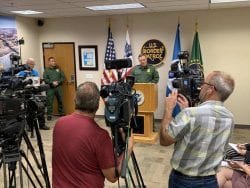 CBP Commissioner Morgan attributed successes to some of the Administration’s policies that included the agreement signed by U.S. and Mexico officials in June.  Mexico pledged to deploy thousands of troops from its newly formed National Guard, approximately 10,000 to its southern border with Guatemala, and about 15,000 to its northern border with the United States.

Also, the policy that established the Migrant Protection Protocols, known as MPP, helps promote a safer and more orderly process on our Southwest border, freeing up time and resources to devote to those migrants who may legitimately merit asylum.

Reflecting on SDC’s statistics, Chief Harrison said “This is a welcome relief and indication that the Administration’s policies are having a significant positive effect.”  He added, “More needs to be done as we have not seen this level of activity in San Diego Sector since fiscal year 2010 when we had more than 65,500 people apprehended.”

Adding to the complications along the border for San Diego, more than 26,166 people of the 51,821 apprehended this fiscal year are from countries other than Mexico, mostly Central America.  This results in an inability to quickly return those individuals to their home countries.

Other complexities contributing to the humanitarian and border security crisis at the border are the influx of family groups and unaccompanied children.  Families are those claiming to be a parent or guardian, who entered the country illegally with someone under the age of 18.  Unaccompanied children are those under the age of 18 who enter illegally on their own.  Specific statistics are available here for San Diego and other sectors along the southwest border.

Chief Harrison said, “I am proud of the work the men and women of San Diego Sector perform every day to protect our communities, while striving to minimize the effects the humanitarian crisis has along the border.”