Posted by: R. Mitchell in In the News July 25, 2019 Comments Off on Secretary Chao Announces Major Infrastructure Investment in America 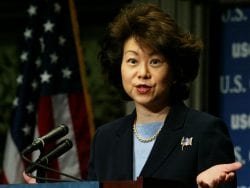 “This significant federal investment will improve major highways, bridges, ports, and railroads around the country to better connect our communities, and to enhance safety and economic growth,” said Secretary Elaine L. Chao.

INFRA discretionary grants support the Administration’s commitment to fixing our nation’s infrastructure by creating opportunities for all levels of government and the private sector to fund infrastructure, using innovative approaches to improve the processes for building significant projects, and increasing accountability for the projects that are built. In addition to providing direct federal funding, the INFRA discretionary grant program aims to increase the total investment by state, local, and private partners.

Additionally, the new program promotes the incorporation of innovative technology that will improve our transportation system.  INFRA will also hold recipients accountable for their performance in project delivery and operations.