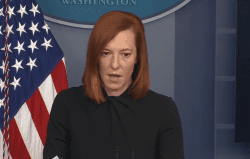 White House Press Secretary Jen Psaki was forced to water down and walk back several statements that President Joe Biden made yesterday on Coronavirus vaccination.

During the White House press briefing Tuesday, several reporters asked for clarification on the timeline in which Americans should expect to have full access to the vaccine and when herd immunity is expected to be reached. Due to mismatches between statements made by Biden and health officials, Psaki was forced to modify most of the commitments Biden made just a day earlier.

During the Monday press conference Biden said that any American who wanted a vaccine would be able to get it “this Spring” and that herd immunity would happen “this Summer.” Health officials, Dr. Fauci, and the CDC had said that neither of those things would happen in those timeframes.

When first asked about Biden’s statements, Psaki re-packaged them into more watered-down language:

Later in the briefing, another reporter specifically called out the mismatches between Biden’s statements and those issued by health officials. At this point, Psaki had no choice but to point out that the president had basically just said stuff that isn’t true:

Q: Biden said anyone who wants a shot will be able to get one by Spring and we’ll have herd immunity by Summer. How is that possible considering CDC says supply won’t increase until March and the states are having so many distribution issues?
A: The president will have more to say later this afternoon. The president hopes to increase availability but the fact is that every American is NOT even going to be eligible for a shot this Spring much less vaccinated.

Secretary Psaki has her work cut out for her for the next 4 years.

Several Biden Statements on Vaccination Walked Back or Watered Down in Briefing is original content from Conservative Daily News – Where Americans go for news, current events and commentary they can trust – Conservative News Website for U.S. News, Political Cartoons and more.