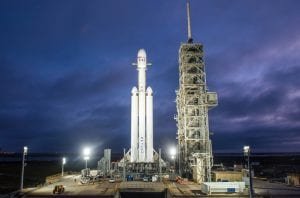 Elon Musk’s private space company has scheduled the second Falcon Heavy Rocket launch and this time, they’re getting paid to do it.

A SpaceX Falcon Heavy rocket will launch the Arabsat 6A communications satellite for Arabsat of Saudi Arabia. Arabsat 6A will provide Ku-band and Ka-band communications coverage over the Middle East and North Africa regions, as well as a footprint in South Africa.

SpaceX is targeting Wednesday, April 10 for the Falcon Heavy launch of the Arabsat-6A satellite from Launch Complex 39A (LC-39A) at NASA’s Kennedy Space Center in Florida.

The satellite will be deployed approximately 34 minutes after liftoff. Following booster separation, Falcon Heavy’s two side boosters will attempt to land at SpaceX’s Landing Zones 1 and 2 (LZ-1 and LZ-2) at Cape Canaveral Air Force Station in Florida. Falcon Heavy’s center core will attempt to land on the “Of Course I Still Love You” droneship, which will be stationed in the Atlantic Ocean.

The launch has been delayed from its original planned launch in the first half of 2018 and again several times in 2018 and 2019 with the latest delays in March and April.

The Falcon Heavy has only launched once, in a test launch when it sent Elon Musk’s Cherry Red Tesla Roadster carrying “Starman” into a heliocentric orbit.

Falcon Heavy is the most powerful operational rocket in the world by a factor of two. With the ability to lift into orbit nearly 64 metric tons (141,000 lb)—a mass greater than a 737 jetliner loaded with passengers, crew, luggage and fuel–Falcon Heavy can lift more than twice the payload of the next closest operational vehicle, the Delta IV Heavy, at one-third the cost. Falcon Heavy draws upon the proven heritage and reliability of Falcon 9.

SpaceX To Use Falcon Heavy Rocket in First Commercial Launch is original content from Conservative Daily News – Where Americans go for news, current events and commentary they can trust – Conservative News Website for U.S. News, Political Cartoons and more.