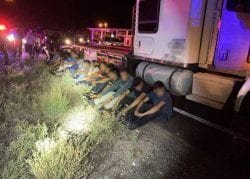 Around 10 p.m., Tucson Sector agents conducted an immigration related traffic stop on a semitractor-trailer near mile marker 371 on state Route 80. Agents arrested 22 Mexican nationals and one Guatemalan national in the process, all illegally present in the United States and ranging in age from 16, to 69.

One Mexican national in the group was processed for a history of extensive immigration violations. The remaining migrants were expelled from the United States via Title 42 authority. The U.S. citizen driver and passenger, both juveniles, were arrested.

Criminal organizations target vulnerable populations, including the youth in border communities, to facilitate human and narcotics smuggling. Tucson Sector Border Patrol fights to combat this dangerous trend through information and education geared towards children and their parents via the T.E.A.M. Kids Program.

For more details regarding this media release or to schedule a remote interview via LiveU, please contact the Tucson Sector Border Patrol Public Affairs Office at [email protected] or by phone at 520-748-3210.

Teens Arrested by Border Patrol in an Attempt to Smuggle 23 Aliens in Semi-Truck is original content from Conservative Daily News – Where Americans go for news, current events and commentary they can trust – Conservative News Website for U.S. News, Political Cartoons and more.