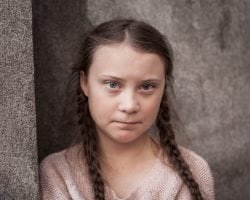 Far-left climate extremist, Greta Thunberg gave a dramatic speech at the United Nations. Being just 16-years-old, this teen gained worldwide attention when she warned of “mass extinction” and continuously declared “how dare you” in a hostile manner.

The Left has used a child as a political shield and gave her worldwide coverage. However, no one is allowed to question what she is claiming without being criticized for “bullying” a kid. Environmentalism has gone from being a movement to protect nature and the planet, and the Left has now hijacked it as a power grab move.

Thunberg also stated, “You have stolen my childhood” during a part in her speech. Who has stolen her childhood, and how? This is basically saying do what I want, or else I will continue to accuse you of ruining my life. Sadly, it is extreme environmental activists, her delusional parents, and corrupt global leaders who have stolen her childhood by grooming her for their agenda.

”People are suffering, people are dying, entire ecosystems are collapsing. We are in the beginning of a mass extinction and all you can talk about is money and fairytales of eternal economic growth.” Watch Greta Thunberg speak at the UN Monday morning. https://t.co/Akkxm9sXdr pic.twitter.com/ahHKlhbYaE

Her being considered a child makes the Left’s use of her that of a political shield. If you criticize their ideologies, you are suddenly accused of demeaning an “innocent” 16-year-old. The same was not true for the Covington Catholic High School kids, that were slandered, bullied, and had their reputations dragged through the mud. All done without a warrant because they supported our president.

These adults have stooped to using children as pawns for their own interests. By using the phrase “for the children,” it creates an attractive appeal to the masses. Top politicians and elites have a method to try and continue to gain power. They contrive a massive crisis and then demand that the people submit to their agenda, all in the tone of the betterment of society. It is the opposite of democracy, and in these situations, rational thinking is rejected.

Greta Thunberg is leading the way for the youth movement devoted to the fighting against climate change. She helped to initiate a global “climate strike.” Children were allowed to leave school for this. Can you image the outrage if kids were allowed to exit during school hours to protest something such as abortion? Climate striking has now become the hot new thing, especially with younger people.

This September, hundreds of thousands, if not millions, of people, protested on the streets all in the name of saving the environment. Instead of going out and doing things that would actually help the environment, like voluntarily cleaning up the streets and planting trees, the protesters just created havoc. There was also a lot of confetti throwing and twerking going on. Of course, this totally helped clean up the planet and made skeptics change their minds.

These hypocritical activists set their eyes on Washington, D.C., and caused a commotion. During rush hour, they took to the streets, and the hashtag #ShutDownDC was used on social media to spread their actions.

This protest was affiliated with the Climate Strike and blocked the roads, which lead to people not being able to get to their places of work. One of the groups that were present was called “WERK for Peace,” where they gave twerking dance lessons. Their twerking efforts made a massive change in terms of pollution and other climate issues.

They are hailed as brave heroes by disrupting people who make positive contributions in society. Just so they can shake their rear ends, all in the name of helping to stop carbon emissions. Some of the posters that were posted included: “Every Billionaire Is Bad” and “Eat The Rich.” They blocked the streets with their “Capitalism Is Killing The Planet” banner. By hijacking the roads, laying down on vehicles, and causing traffic jams, these protesters caused a lot of gas-guzzling to occur. But no one ever said groups like these are known for their great common sense.

Here is a sample of the traffic jam caused by the Shut Down D.C. climate protesters. pic.twitter.com/dEVe1GvRIi

Instead of going after the world’s leading polluters such as China and India, these protesters are determined to do everything in their power to do disruptive actions that make no positive impact on the environment or society. It really seems as if they have no real clue what they are protesting. Their leaders that they exalt in almost a god-like fashion insist that “something must be done.” What is the “something” exactly? Twerking in the streets and littering them with confetti?

Well, if you go to the website of Global Climate Strike, you’ll find that what they are asking to be done is that everyone needs to.”Stop burning fossil fuels and ensure a rapid energy revolution with equity, reparations, and climate justice at its heart.”

Through this, you’ll see what most of us already know. The main goal is not about saving the planet. Instead, it is about climate justice through the implementation of reparations. Just like with the words “social justice,” which is just a fancy way of saying socialism, these climate justice agitators are just pawns of the global leftist elites.

Thunberg accused world leaders of many things, including stealing her dreams and childhood due to their lack of combatting climate change. She also scolded those who see economic growth as a good thing. One of the leaders she undoubtedly was referring to was President Trump. During the conference, Thunberg could be seen angerly glaring at the president as he walked past to speak to reporters. She has said she has no desire to meet with President Trump because the teen believes he would not be open to what she wants.

While Thunberg claims that she and fellow young people are being failed, the statistics show a different story. According to data collected by HumanProgress.org, the poverty rate worldwide had reduced from 28 percent in 1999 to just 11 percent in 2013. The same positive trend continues for school completion, child labor, world hunger, literacy, and much more.

Children are being scared into compliance. Always filling their minds with the untrue fairytales of an imminent apocalypse has caused unnecessary anxiety and even depression. In a piece from National Geographic, it reads. “More than a few teens who began as fervent activists have dropped out, citing depression, anxiety, and other fears that the world’s leaders will not act in time to prevent their lives — and the lives of their children — from being irretrievably altered by climate change.”

Using the malleable minds of children to further agenda is something that we should not tolerate. Through our school systems and media, kids are being programmed to believe certain things and are taught not to question or think for themselves. As a society, and as Americans, we need to say enough is enough. We need to stick up for future generations and stop this slippery slope before it is too late.

The Case of Greta Thunberg: Political Agendas Are No Child’s Play is original content from Conservative Daily News – Where Americans go for news, current events and commentary they can trust – Conservative News Website for U.S. News, Political Cartoons and more.