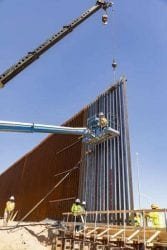 CALEXICO, Calif. – On June 27, 2019, U.S. Customs and Border Protection (CBP), in partnership with the U.S. Army Corps of Engineers (USACE), began panel installation for approximately 11 miles of new border wall system in place of dilapidated and outdated designs in Calexico, California within U.S. Border Patrol’s (USBP) San Diego Sector. This project will include the construction of 30 foot tall steel bollards and technology improvements.

The construction start for this project was announced earlier this month, along with the new border wall project in Tecate, California. Construction for both of these projects, which total approximately 15 miles, is anticipated to continue into 2020.

These projects are funded by CBP’s Fiscal Year 2018 (FY18) appropriation and are not undertaken pursuant to the National Emergency Declaration, 10 U.S.C § 284, 10 U.S.C. § 2808, nor do they draw from any other source of funding, including appropriations available to the Department of Defense.

On December 20, 2018, on behalf of CBP, USACE awarded a contract to SLSCO Ltd for approximately $127 million to construct approximately 15 miles of new border wall system in place of dilapidated or outdated designs located in Tecate and Calexico, Calif., within USBP’s El Centro and San Diego Sectors.

The San Diego and El Centro Sectors are areas of high illegal entry and are experiencing large numbers of individuals and narcotics being smuggled into the country illegally.  The construction of border infrastructure within these project areas will support DHS’s ability to impede and deny illegal border crossings and the drug and human smuggling activities of transnational criminal organizations.

The First Panels of the Calexico Border Wall Project Installed is original content from Conservative Daily News – Where Americans go for news, current events and commentary they can trust – Conservative News Website for U.S. News, Political Cartoons and more.