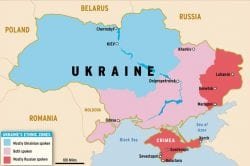 “In the five years since Russia started its campaign of aggression against Ukraine, we have stood firmly with our Transatlantic partners in opposition to Russia’s malign and illegal actions, including its attack near the Kerch Strait,” U.S. State Department officials said in a statement. “Russia’s attack represented a dangerous escalation and a violation of international law. We call upon Russia to immediately return to Ukraine the seized vessels and detained crewmembers, and keep the Kerch Strait and the Sea of Azov open to ships transiting to and from Ukrainian ports.”

“We also call on Russia to respect Ukraine’s sovereignty and territorial integrity within its internationally recognized borders, including its territorial waters,” they added.

Officials also said that the international community will not stand by while Russia continues to violate international norms and laws and the Transatlantic community stands united in our efforts to counter Russian aggression.

Five years after its invasion of Ukraine and its attempted annexation of Crimea, Russia continues to undermine Ukraine’s sovereignty and territorial integrity while failing to implement its obligations under the Minsk agreements.  On November 25, 2018, Russian authorities opened fire on and rammed three Ukrainian ships off the coast of Crimea, seizing the ships and capturing 24 Ukrainian crew members, who remain illegally detained in Russia.  Russia also continues its occupation of Crimea, and the Kremlin has also backed illegitimate elections held by Ukrainian separatists in the so-called Donetsk People’s Republic on November 11, 2018.

As a result of today’s designations, all property and interests in property of the designated individuals and entities are blocked, and U.S. persons are generally prohibited from transacting with them.  Moreover, any entities owned 50 percent or more by these designated persons are also blocked by operation of law.

Source: U.S. Department of State, U.S. Department of the Treasury
Content created by Conservative Daily News is available for re-publication without charge under the Creative Commons license. Visit our syndication page for details and requirements.

Illegal alien from China sentenced in Houston to more than 5 years in federal prison for gun, identity theft convictions after threatening to shoot children