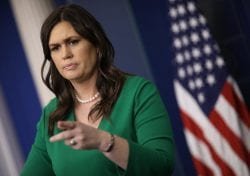 The Trump administration issued a strong warning to former Venezuelan dictator Nicolas Maduro after two citizens, attempting to get food and supplies into the country, were killed by soldiers loyal to him.

“The world is watching,” White House Press Secretary Sarah Sanders said in a statement. “Press reports indicate that the military has killed two indigenous people and has injured many other people attempting to keep the border open to humanitarian aid.”

“Egregious violation of human rights by Maduro and those who are following his orders will not go unpunished,” she added. But, it is unclear how that punishment will be doled out.

The United Nations Human Rights Council has been largely silent on Maduro’s use of military force to prevent much-needed food and medicine from reaching the people of Venezuela, likely because Russia has and China have more sway over the defunct, corrupt group than do countries that care about the Venezuelan people. During the council’s 22nd session, from Feb. 18 to 22, there is no mention of Venezuela and ongoing human rights violations by Maduro.

The council will meet again on Feb. 25 and Venezuela is on the agenda, but as the world is used to, the United Nations is likely to do little other than an official statement of some sort.

Venezuelan Interim President Juan Guaido has requested immediate humanitarian assistance from the international community for the people of his country, while the Maduro regime has given orders to close the borders and repress those who seek to bring aid into the country.