Posted by: R. Mitchell in In the News April 30, 2019 Comments Off on U.S. Border Patrol Agents Apprehend More Than 650 Illegal Aliens in New Mexico This Morning 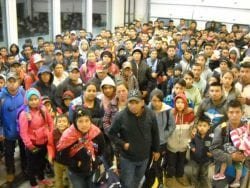 SUNLAND PARK/ANTELOPE WELLS, N.M. – U.S. Border Patrol agents working in New Mexico apprehended several large groups between midnight and sunrise on Tuesday. These groups, like many others before, are comprised primarily of Central American families and unaccompanied juveniles.

Agents encountered a group of what seemed to be over 400 illegal aliens in Sunland Park just after midnight.  Border Patrol agents were able to apprehend all the aliens. In just a few hours the total number taken into custody in the Sunland Park area was 424.

While dealing with this influx of people in the Sunland Park area U.S. Border Patrol agents working at Camp Bounds Forward Operating Base at the Antelope Wells Port of Entry, arrested a large group of 230 illegal aliens around 2 a.m.  This group was also comprised primarily of Central American families and unaccompanied juveniles.

This is an ongoing situation that U.S Border Patrol agents are facing in southern New Mexico: hundreds of parents and children being encountered by agents after having faced a dangerous journey in the hands of unscrupulous smugglers.

Criminal organizations continue to exploit innocent human lives in order to enhance their illicit activities without due regard to the risks of human life.  In most cases, these smugglers never cross the border themselves in order to avoid apprehension.

READ  Trump Administration Sanctions Russian Bank for Attempting to Circumvent Sanctions on Venezuela
Wake up Right! Subscribe to our Morning Briefing and get the news delivered to your inbox before breakfast!
2019-04-30
+R. Mitchell
Previous: President Donald Trump’s Schedule for Tuesday, April 30, 2019
Next: 231 Central Americans Surrender to Tucson Sector Border Patrol