Posted by: Jim Garamone in In the News September 18, 2019 Comments Off on U.S. Forensics Team to Help Saudis Determine Iranian Involvement in Attack 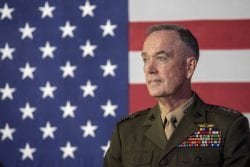 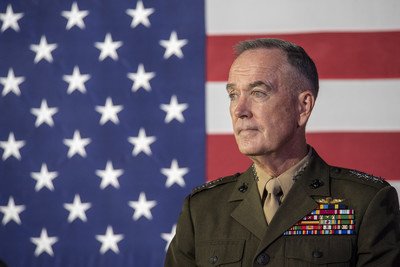 The United States is giving Saudi Arabia time to assess the Sept. 14 attacks on its oil facilities, but all signs point to Iran or Iranian proxies, the chairman of the Joint Chiefs of Staff said.

“In the region, wherever it originated from, the most likely threat is either Iran or Iranian-backed proxies,” Dunford said. “Without getting out in front of the Saudi investigation, I think that is a reasonable conclusion.”

The United States doesn’t have “an unblinking eye” over the Middle East, the chairman said. “Our intelligence, surveillance and reconnaissance capabilities are focused on threats routinely to us; we wouldn’t necessarily see everything that goes on in the region,” he said.

The general said the military is planning options for the president and other civilian leaders. Dunford stressed that the military is only one possible response, noting that economic, political and diplomatic responses are available as well.

The United States provides intelligence to Saudi Arabia to help the kingdom protect itself from the Houthi rebels in Yemen. The Saudis have not requested additional intelligence support or military assistance from the United States, the chairman said. “We haven’t changed the intel arrangement in the wake of this incident,” he added.

The attack was not a surprise given the tensions in the region, Dunford said.

“We did assess, and continue to assess, that we have deterrence in place against Iranian-backed proxies against the United States,” he told reporters. “But we know, based on attacks against Saudi Arabia and the United Arab Emirates, … that they have not been deterred from attacking those countries.”

Though the size of this attack was greater than others, Saudi Arabia has been attacked a number of times by Iranian-backed proxies, Dunford said. “Without prejudging intelligence, this looked like a very complex, precise attack, not consistent with previous Houthi attacks,” he added.

Wake up Right! Subscribe to our Morning Briefing and get the news delivered to your inbox before breakfast!
2019-09-18
Jim Garamone
Previous: President Donald Trump’s Schedule for Wednesday, September 18, 2019
Next: A Safe Bet – A.F. Branco Cartoon